Safety and Efficacy of a Fixed Combination Halobetasol and Tazarotene Lotion in the Treatment of Moderate-to-Severe Plaque Psoriasis: A Pooled Analysis of Two Phase 3 Studies

The recently published data on the phase 2 study of HP/TAZ lotion demonstrated synergistic benefits of the combination over the individual active ingredients, with a favorable irritation profile and much low incidence of application site reactions.11Here we further report the safety and tolerability of HP/TAZ lotion, presenting data on two phase 3 clinical studies in moderate-tosevere psoriasis. Treatment success was rapid and achieved in over 40% of subjects by week 8; with substantial reductions in BSA, and a significant improvement in psoriasis signs and symptoms (erythema, plaque elevation and scaling). Reduction in mean BSA was similar in those subjects with moderate and more severe disease, while there was minimal improvement with vehicle. A similar picture was seen when subjects were categorized by baseline IGA. Indeed, no subjects with severe disease who were treated with vehicle achieved treatment success.We also noted sustained improvement over the 4-week posttreatment period, likely influenced by the tazarotene component.Risk of rebound (a worsening of disease following treatment discontinuation) is an important, and often overlooked aspect of psoriasis management. Tazarotene appears to induce longer remission than TCS,9 where disease rebound after treatment discontinuation has been reported. Although the follow-up period in our studies was relatively short, a high proportion of subjects were treatment success four weeks after cessation of therapy.Treatment with HP/TAZ lotion also provided significant, rapid and sustained benefits in controlling itch, without any obvious deleterious effect of the tazarotene component which has reduced its use in psoriasis. Pruritus can be a very unpleasant and common psoriasis symptom,10 affecting sleep and impairing QoL. Itching can also occur as a result of dry skin. Skin dryness was improved by 44% and burning/stinging reduced by 46% over the 8-week treatment period and continued to improve post-treatment. Physicians continue to have long-term safety concerns with TCS,4,11,12 patients remain concerned about the risk of skin thinning, 13 and product labelling restricts halobetasol consecutive use to two weeks. There were minimal safety concerns in our two studies using an 8-week treatment regimen with HP/TAZ lotion, and long-term studies are currently being evaluated to provide useful information to patients and clinicians on the potential benefits of this topical formulation. HP/TAZ lotion was well tolerated with only three treatment related AEs reported by ≥ 2% subjects. While irritant contact dermatitis was the most common, it was not reported in the phase 2 study (with the exception of the tazarotene monotherapy arm) and here is likely the consequence of the tazarotene component in HP/TAZ lotion. In the majority of cases it was mild or moderate in severity. Pruritus was similar to the rates reported with vehicle (2.2% versus 2.9%). 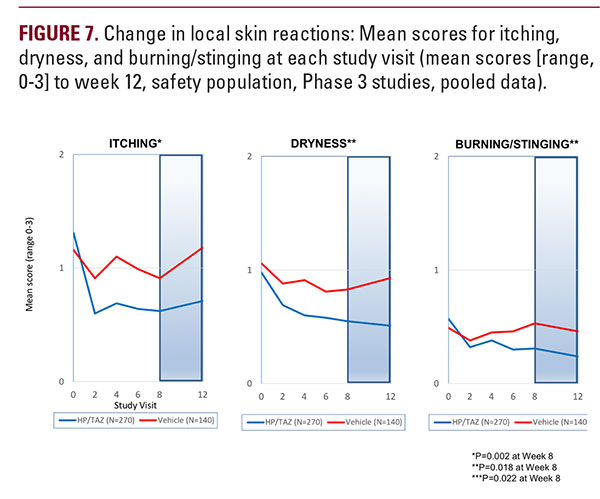 Halobetasol propionate 0.01%/ tazarotene 0.045% lotion provides synergistic efficacy, with rapid and sustained improvement in disease severity. HP/TAZ lotion was consistently more effective than vehicle in achieving treatment success, reducing the BSA affected by the disease, and reducing erythema, plaque elevation, and scaling at the target lesion. There were minimal safety concerns with using a longer treatment than is normal for TCS options and HP/TAZ lotion may provide a realistic long-term treatment option in patients with moderate-to-severe plaque psoriasis.

Drs Sugarman, Weiss and Stein Gold are advisors to Ortho Dermatologics; JS, LGS, JB were principal investigators in the studies; and TL, GM, RK and RI are employees of Bausch Health.

We thank Brian Bulley, MSc (Konic Limited, UK) for assistance with the preparation of the manuscript. Ortho Dermatologics funded Konic’s activities pertaining to this manuscript.