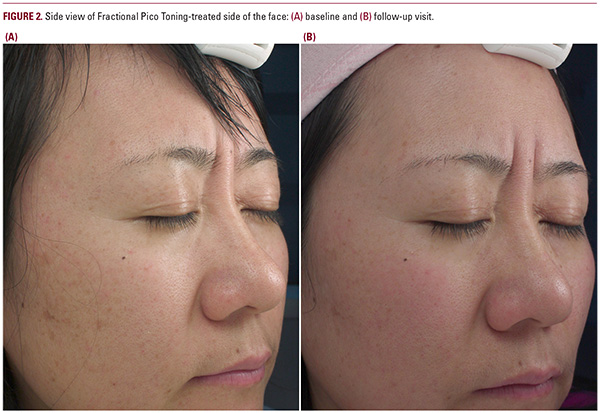 Evaluation of Efficacy and Complications

Assessment of facial photoaging was conducted by two blinded independent dermatologists who were not involved in the enrollment, treatment, or study visit. Digital photographs were taken from different angles at baseline, each treatment visit, and follow-up time points. Based on these digital photographs, severity of facial photoaging was then assessed based on two scales, a 5-point Global Photoaging Scale (GPS) by Dover et al.16 and a 6/8-point Asian Photographic Scale (APS) described by Chuang et al.17 In addition, a 10-point Visual Analog Scale (VAS) was also used to evaluate the pain associated with the treatment immediately post treatment. Post-treatment erythema, edema, pigmentary changes, and other anticipated side effects were also documented at each visit.

The Wilcoxon signed rank test was used to compare the scores of GPS and APS of each side of the face between baseline and 2-month follow-up visit. Meanwhile, differences of GPS on the same side of the face among all time points were determined by the Friedman test. The VAS of pain was also analyzed. Statistical analysis was conducted by IBM SPSS version 16.0 (IBM Corporation, Somers, NY). The level of significance was defined as P<0.05.

Ten female subjects were enrolled in the study and all participated to completion. The mean age was 45.70±7.94. Five subjects were categorized as Fitzpatrick skin type III and the