Case 1: Immediate Presentation
Patient is a 39-year-old woman with no significant past medical history who, following 15 minutes of ½ teaspoon of topical 30% lidocaine cream (Specialty Compounding Pharmacy, Sherman Oaks, CA),received 1.5 cc of CaHA (Radiesse, Merz Aesthetics, San Mateo, CA) into each nasolabial fold and 0.75 cc to each infraorbital region.The last treated segment was the left nasolabial fold; and after 0.5 cc of CaHA was injected,an immediate blanch was noticed over the left medial cheek, lateral left nasal sidewall and extending down to the left upper lip. The injection was immediately stopped. The patient had no complaints nor suspected anything unusual.Application of a half inch of 2% nitroglycerin paste (Nitro-BID, E. Fougera & Co., Melville, NY) was massaged onto the area. Within five minutes, a pink hue returned to the affected area and the skin appeared similar to the other side. The patient was watched for thirty minutes, and following no unusual signs or symptoms,she was discharged without any difficulty.
Two days later, the patient returned to the clinic with asymmetric edema and erythema of the left lower face, along with congestion of the upper lip and left buccal mucosa (Figure 1a). There was no sign of skin necrosis, but a reticulated pattern of vascular congestion was noted. Tenderness and mucosal ulceration of the upper lip was apparent (Figure 1 b and c). The patient was diagnosed with venous congestion and vascular compromise. After appropriate skin testing, she was treated with 150 units of hyaluronidase (Vitrase, ISTA Pharmaceuticals,Irvine, CA) mixed 1:1 with saline to the left nasolabial fold and a half inch of a 2% nitroglycerin paste was massaged into the area. She was placed on methylprednisolone (Medrol Dosepak, Pfizer, New York, NY), aspirin 325 mg daily, antacids and a topical oxygen infusion cream (Dermacyte Oxygen Concentrate, Oxygen Biotherapeutics, Inc., Durham, NC) to be applied topically twice-daily.
She was seen daily for nitroglycerin paste massages with decreasing congestion noted each day. Oral cavity ulceration was resolved within 24 hours of its presentation. Three days later, five days after the injection, the patient's erythema and edema were markedly improved (Figure 1d). Nitroglycerin paste massages were terminated. She was satisfied with the cosmetic results. The patient was instructed to complete the methylprednisolone pack and continue the daily aspirin and oxygen cream for one more week.
Case 2: Early Presentation (24 to 48 Hours)
Patient is a 43-year-old woman who received 1.0 cc of CaHA (Radiesse, Merz Aesthetics, San Mateo, CA) into each nasolabial fold, following 15 minutes of ½ teaspoon of topical 30% lidocaine cream (Specialty Compounding Pharmacy, Sherman Oaks, CA). The procedure was uneventful. The patient returned four days later with complaints of "soreness, swelling and redness" to the right nasolabial fold region, all of which started approximately twenty-four hours after receiving the injection (Figure 2a).She also noted small amounts of drainage coming from the superior 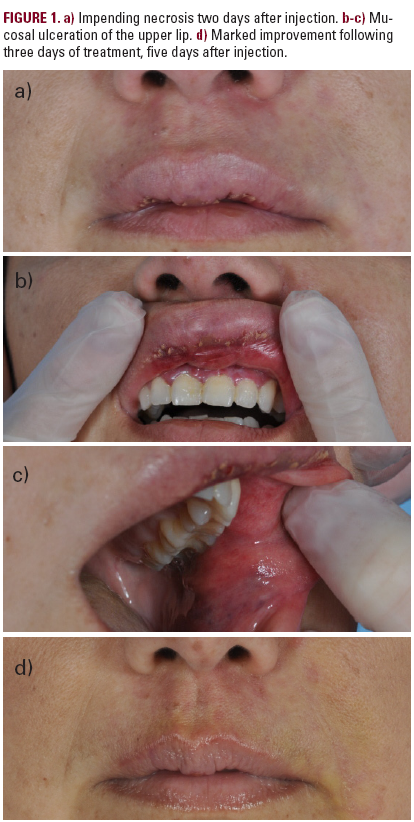