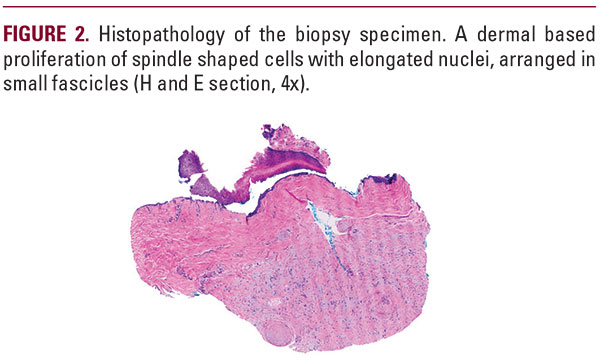 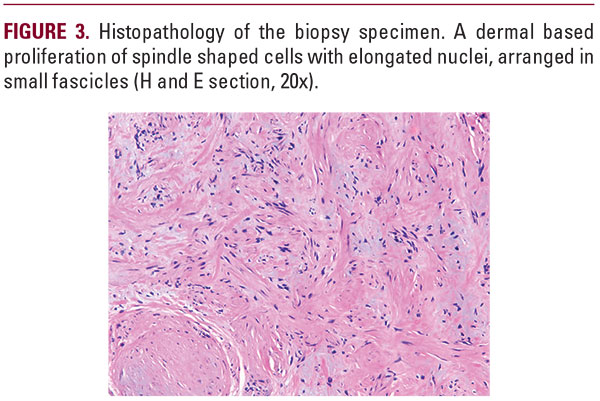 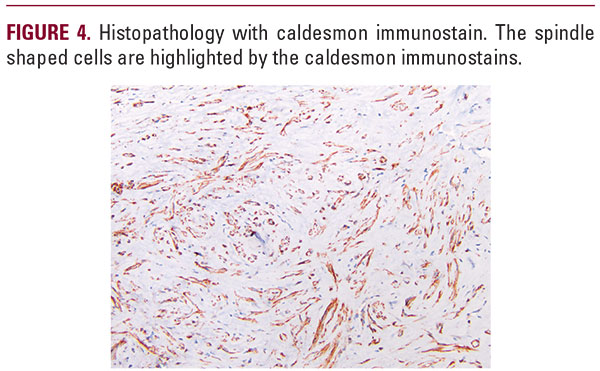 Our patient presented with longitudinal erythronychia, onycholysis, and nail splitting along with cold sensitivity and an enhancing lesion with bony erosion on MRI. The differential diagnosis for monodactylous longitudinal erythronychia, defined as longitudinally oriented red line in the nail plate, includes onychopapilloma, lichenoid inflammation, glomus tumor, verruca, squamous cell carcinoma, and amelanotic melanoma.3 Onychopapilloma is the most common cause of longitudinal erythronychia, which presents with a keratotic papule at the free edge of the nail plate, which was notably absent in this case. The Love test (pinpoint pressure provoking pain in the area of the tumor) and the cold sensitivity test (cold application reproduces pain), when positive are highlysuggestive of a glomus tumor.3 Despite the enhancing lesion on MRI with bony erosion suspicious for a glomus tumor, both theLove and cold sensitivity test were negative in this case.Our patient’s biopsy was consistent with a subungual leiomyoma. A leiomyoma, including a subungual leiomyoma, on microscopic examination exhibits a proliferation of bland appearing spindle shaped cells with elongated, blunt ended nuclei (SMA and caldesmon positive), arranged in fascicles. Histologically, an onychopapilloma represents a benign proliferation of nail bed epithelium characterized by acanthosis, papillomatosis, and matrix metaplasia. A glomus tumor is a modified smooth muscle cell neoplasm (SMA positive), which on microscopic examination appears as a distinct proliferation of bland appearing round cells (glomus cells), surrounding vascular spaces. Squamous cell carcinoma and melanoma are cytologically atypical and mitotically active proliferations ofepithelial cells or keratinocytes (cytokeratin positive), and of melanocytes (S-100, melan-A and HMB45 positive), respectively. Verruca, on histologic examination, is a papillomatous growth of keratinocytes associated with viral inclusion bodies or koilocytes. A lichenoid inflammatory process presents as a bandlike infiltrate which obscures the dermal-epithelial junction.Leiyomyomas involving the nail unit or subungual leiomyomas are quite rare with the first case reported by Lebouc in 1889.4Subsequently, only 5 reported cases have been reported to date, including our case.1,2,5,6 Of these cases, the mean age was 50 years (range 16-69), and there was a female predominance (4/5 patients). Three cases involved the index finger (2 left, 1 right),and the other cases involved the right hallux and left thumbnail. Duration of the nail change was several months in 3/5 cases, andthe two other cases for 2 years and 10 years. The most common physical examination findings were longitudinal erythronychiaor less commonly a blue nodule. Other secondary findings were onychoschezia and onycholysis. Symptoms included pain, tenderness and/or cold sensitivity. X-rays were typically negative for bone erosions or masses. MRI with contrast typically showed bone erosions and a well-defined tumor, and the vasculature in the case of angioleiyomyoma was enhanced on post-contrast images.6Interestingly, our patient had a history of uterine leiyomyomas, requiring hysterectomy. To our knowledge this is the first reportof the association of a subungual leiyomyoma with other leiyomyomas in the same patient and suggests a common pathogenic mechanism. While rare, leiyomyoma of the nail unit should be considered in the differential diagnosis of longitudinal erythronychia, particularly when accompanied by pain. A biopsy with histopathology is necessary for diagnosis, since glomus