ARTICLE: IL-23 Versus IL-17 in the Pathogenesis of Psoriasis: There Is More to the Story Than IL-17A 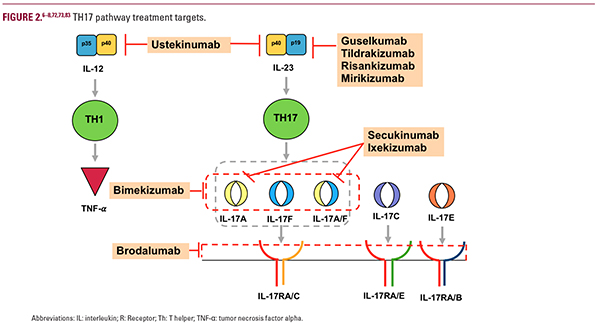 Currently, the only FDA-approved biologic therapy that can inhibit the effects of IL-17F is brodalumab, as discussed below. One molecule in late phase development that targets IL-17F is bimekizumab. Bimekizumab binds to both the IL-17A and F subunits, thereby blocking three of the five IL-17 isoforms (AA, FF, and AF) (Figure 2).72,73 It is unclear whether preliminary successes observed in psoriasis and psoriatic arthritis are secondary to effective inhibition of IL-17A or the combined effect of blocking IL-17A and IL-17F.71,72 Some studies suggest that combined blockade of IL-17A and IL-17F may be more effective at lowering inflammation than IL-17A alone.74,75

IL-17C in Psoriasis Pathogenesis and Therapies That Target IL-17C
IL-17C is the most abundant IL-17 cytokine in psoriatic skin lesions. 57 In psoriasis, the role of IL-17C is not well understood but it is believed to be crucial in the pathogenesis. The primary function of IL-17C is to promote inflammation through the induction of inflammatory cytokines, chemokines, and antimicrobial peptides.57,76,77 In vitro and in vivo studies suggest that IL-17C is upregulated in psoriasis skin inflammation and is involved in epidermal thickening.54,57,76,78 Preliminary studies also show that IL-17C may be involved in joint inflammation.79 Of note, IL-17C acts synergistically with TNF-α.57

IL-17C binds to IL-17RA and has a 23% homology with IL-17A.16 IL-17C also mediates further signaling by binding to a IL-17RA/ IL-17RE complex.80 IL-17C is expressed by many epithelial cells such as prostate and fetal kidney cells and keratinocytes rather than immune cells (Table 1).16 Brodalumab is a monoclonal antibody that binds to IL-17RA. IL- 17RA mediates the signaling for IL-17A, IL-17F, IL-17C, and IL-17E. Therefore, brodalumab blocks the function of all five IL-17 isoforms (AA, AF, FF, CC, and EE) by binding to IL-17RA (Figure 2).81 Importantly, brodalumab is the only therapeutic antibody that binds to all five IL-17 isoforms and that can bind to the IL-17C and E subunits. Data suggest that brodalumab also leads to a reduction in IL-23.82 Therefore, targeting IL-17RA by brodalumab appears to normalize the levels of IL-17 subtypes (IL-17A, IL-17F, IL-17C, and IL-17E) as well as IL-23. A recent network meta-analysis showed that brodalumab has superior efficacy compared to TNF-a inhibitors (adalimumab, etanercept, and infliximab), ustekinumab, and secukinumab.83–86 Although a direct comparison study has not been conducted, these findings suggest that targeting IL-17RA may be more efficacious than targeting IL-17A alone.83 Additionally, a comparison study showed that, compared to ustekinumab, almost twice as many patients treated with brodalumab achieved psoriasis area severity index (PASI)- 100; and in patients who had failed previous therapies, three times as many patients treated with brodalumab achieved PASI-100 (32.0% vs 11.3%).