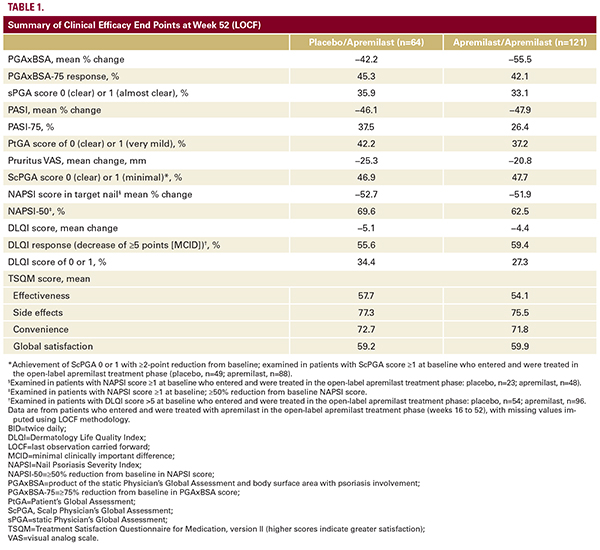 side effects domain (mean score: placebo/apremilast, 77.3; apremilast/apremilast, 75.5) compared with other domain scores. Mean global satisfaction scores were 59.2 in the placebo/apremilast group and 59.9 in the apremilast/apremilast group (Table 1).SafetyDuring the apremilast-exposure period (0 to 52 weeks), 211 patients received ≥1 dose of apremilast, and total exposureto apremilast was 149.7 patient-years. Similar to the placebo controlled period (0 to 16 weeks),10 most AEs were mild or moderate in severity, and AEs leading to treatment discontinuation up to 52 weeks occurred in 6.6% of patients receiving apremilast (Table 2). Eleven serious AEs occurred among 10 (4.7%) patients treated with apremilast; each serious AE occurred in 1 patient. There was 1 serious AE, diverticulitis, that was considered related to study treatment. The diverticulitis event occurred in 1 patient and lasted 13 days, did not cause any dose change, and resolved. One patient with a history of depression attempted suicide, which was considered a serious AE but not related to study treatment. During the apremilast-exposure period, nonserious AEs of depression were reported in 4 patients, of which 3 were considered treatment-related; 1 patient had a prior history of depression. A nonserious AE of suicidal ideation was reported in 1 patient, which was considered treatment-related.