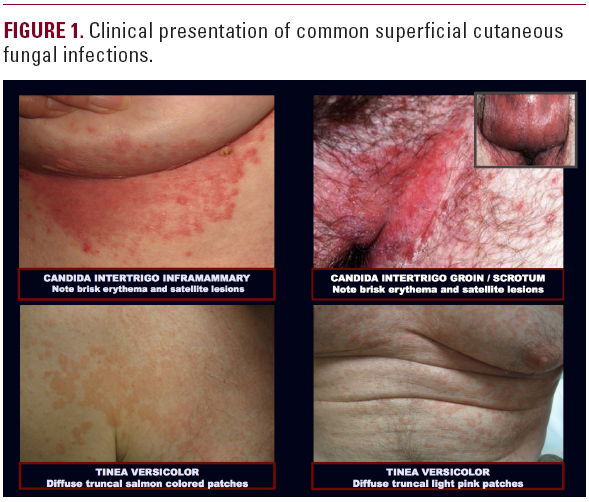 involvement, and are often more refractory to conventional therapies and/or exhibit frequent recurrence.7
Importantly, due to the commensal nature of the causative organism,recurrences of tinea versicolor are common after a course of effective therapy in both immunocompetent and immunocompromised populations, with a recurrence developing usually within 2 years of a previously treated episode. The clinical manifestations are somewhat variable and the eruption is usually asymptomatic, with mild pruritus reported in occasional cases.5,6 The common clinical presentations are multiple tan, salmon-colored, or light pink patches with fine (pityriasiform) scaling, which become hypopigmented as compared with non-affected skin when a tanning response occurs after ultraviolet light exposure, or in individuals with darker skin color (Figure 1). Patients with dark skin can present with hyperpigmented patches or with multiple small truncal macules that appear to be perifollicular.6,8 A potassium hydroxide preparation (KOH) of scales obtained from affected areas demonstrates short hyphae and clusters of round spores (“ziti and meatballs”), although organism growth is not sustained on conventional fungal cultures, including a dermatophyte test medium (DTM).4-6 After successful clearance of the proliferated yeast organism,it may take several weeks for the variations in skin color from previously affected and non-affected sites to match up visibly,a point that is important to communicate to patients.5
Candidiasis
Cutaneous candidiasis (CC), which can include some forms of mucocutaneous infection, is most often caused by Candida albicans and includes presentations more commonly seen in office dermatology practice such as Candida intertrigo (Figure 1), Candida genital infections (balanitis, vulvovaginitis), oral candidiasis (acute and chronic), angular chelitis (perleche), Candida paronychia and in some cases diaper dermatitis.6,9,11 Less common CC presentations encountered in dermatology offices are “erosio interdigitalis blastomycetica” (usually third web space of a hand), Candida glossitis (atrophic; painful), congenital cutaneous candidiasis (acquired in utero; manifests first day after birth; diffuse), neonatal candidiasis (onset days after birth), acute denture stomatitis (often coexists with perleche), and Candida folliculitis (rare; affecting hair-bearing areas of face).9-11 However, other species that are believed to behave as pathogens in some cases have been identified from skin and nails, such as C parapsilosis and C tropicalis, which were identified in 29.1% and 7.8% of cases, respectively.10
Cutaneous candidiasis usually emerges as an opportunistic infection due to local factors and/or systemic factors that promote colonization of skin or mucosa.7,9,11 Involvement of naturally intertriginous areas (ie, axillae, inframammary, groin, mouth corners), other skin folds (ie, abdominal apron), and interdigital web spaces are cutaneous sites of predisposition, although sometimes other skin sites can be affected.6,9 Local factors promoting colonization and infection are occlusion, accumulated moisture, maceration, structural compromise of the epidermal barrier, and other aberrations of epidermal barrier function such as alkaline skin pH (ie, in newborns), alterations in cutaneous microbial flora, and impairments of the antimicrobial and immune response barriers of the epidermis.9
Systemic factors that may predispose a patient to colonization and infection with Candida spp are recent exposure to antibiotic or corticosteroid therapy, diabetes (especially when poorly controlled),or immunosuppression by underlying disease states or specific therapies.7,9,12 The multiple clinical presentations of CC, which also include chronic mucocutaneous types of infection,are beyond the scope of this article and are well described elsewhere.6,9 Nevertheless, the common clinical presentation of Candida infection involving the skin, Candida intertrigo, is described as briskly erythematous patches/plaques that are often tender, painful, and/or pruritic, can be denuded and exudative in some cases due to friction, may exhibit some scaling toward the edges, and typically exhibit “satellite lesions,” which are erythematous papules and pustules (Figure 1).6,9 When Candida intertrigo affects the groin region of males, the scrotum may be affected, which differs from dermatophyte infection (tinea cruris) where scrotal involvement is very rarely seen.
Cutaneous Dermatophyte Infections
Other than tinea capitis, cutaneous dermatophyte infections (CDIs) are relatively uncommon in children; hence this article