Abstract
Capecitabine is emerging as an important drug in the treatment of metastatic breast and colorectal cancers. Marketed as Xeloda ®, this prodrug is taken orally and readily absorbed. It is novel in its increased convenience for patients, similar efficacy to the intravenous form of its active metabolite and its increased tolerability.1 We present a woman with metastatic breast cancer who presented with cutaneous abnormalities two months after starting treatment with capecitabine. Various dermatologic side effects have been attributed to capecitabine, often requiring cessation of the offending drug. We describe an unreported dermatological side effect of capecitabine therapy, systemic lupus erythematosus concurrent with palmoplantar erythrodysesthesia. As the use of this chemotherapeutic agent becomes more prevalent, it is important to recognize the range of its cutaneous side effects.

A 54-year-old woman with a history of metastatic breast carcinoma with bilateral mastectomy presented for evaluation of a new-onset rash after initiation of treatment with capecitabine. The patient has a past medical history significant for a naproxen allergy, which causes anaphylaxis, osteoarthritis of the left hip treated with total hip arthroplasty in 2007, and a 35 pack-per-year smoking history. The patient denied a personal or family history of "lupus."
In 2007, she noticed a mass in her right breast and was soon diagnosed with invasive ductal carcinoma of the right breast and lobular carcimona in situ of the left breast. At this time, she was treated with modified radical mastectomy of the right breast with axillary lymph node dissection and left simple mastectomy. The lymph nodes were positive for metastasis, and she began treatment with doxorubicin (Adriamycin) and cyclophosphamide (Cytoxan) in March of 2008. After four cycles, she completed an additional course of docetaxel ending in November 2008. A month later, the patient noted a swelling in her neck; a left supraclavicular lymph node biopsy in early 2009 showed metastatic carcinoma consistent with spread of her primary breast tumor.
In March of 2009, she began treatment with capecitabine at 3,500 mg daily and developed an erythematous rash on her face and chest around the fourth day. She denied any itching, pain, or numbness. She stopped taking capecitabine on the eleventh day of treatment and the rash began to subside, and following treatment with doxycycline 100 mg daily, the rash improved significantly. The patient then started the second cycle of capecitabine at a 25% dose reduction along with another course of doxycycline.
The eruption waxed and waned, with exacerbations occurring during courses of chemotherapy and modest improvement between treatments. There was no improvement in the dermatitis following the decreased dose. After the second round of chemotherapy with capecitabine, the patient developed painful blistering of her hands and feet consistent with palmoplantar erythrodysesthesia (PPE) (Figure 1). During the third round of chemotherapy at the same dose, she experienced worsening PPE, which prevented her from ambulating. With the emergence of this intolerable side effect, the oncologist stopped the drug mid-treatment and switched her chemotherapy to IV ixabepilone. The patient experienced complete resolution of the PPE two months after cessation of capecitabine, with the facial eruption improved but not completely resolved. 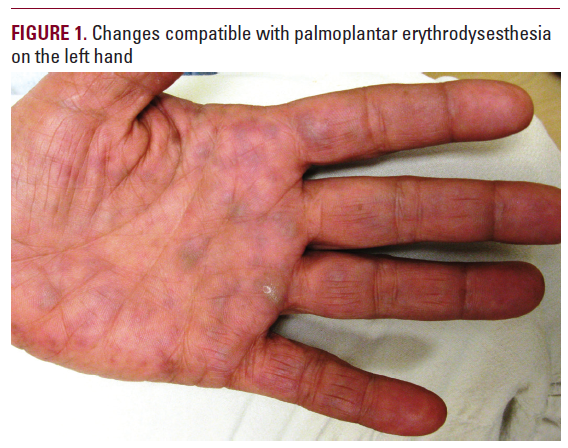