Topical Cannabinoids for the Management of Psoriasis Vulgaris: Report of a Case and Review of the Literature

The interest in use of medical cannabis for chronic dermatologic conditions such as psoriasis, eczema, and acne has been growing mostly owing to rapidly emerging decriminalization across the country and impressive commercially driven popularization of a variety of cannabinoid preparations including topical forms such as creams, salves, lotions, lubricants, and many others. However, while the market is exponentially growing, the rate at which mechanistic and clinical evidence supporting the use of cannabinoids in a litany of diseases is significantly slower. In fact, Robinson et al highlighted significant gaps in dermatologists understanding of the biology of cannabinoids and comfort with this space, further highlighting the great need to disseminate information throughout the medical community.1 Along this vein, we present a case of a young man with psoriasis managed with topical cannabinoids.

A 33-year-old male patient, with no significant past medical history, presented with a one-year history of psoriasis. Of note, he reported a strong family history of psoriasis with his sister and his father. Disease course began two years prior to diagnosis with erythematous, scaly plaques in sebaceous areas, which progressively worsened (Figures 1A and 1C); he tried over-the-counter topical hydrocortisone steroid cream that failed to control his symptoms. The patient saw his primary care physician who prescribed triamcinolone acetonide cream 0.1%. This appeared to reduce erythema on the patient’s face, but for only a short time and the disease spread to his trunk and other areas of his body. Upon follow up, apremilast was recommended, however, he was uninterested only because of cost and side effect profile and wished to pursue a natural approach. After reviewing the pros and cons of utilizing topical medical cannabinoids, the patient was provided with samples of tetrahydrocannabinol (THC) distillate cream with medium chain triglyceride (MCT) oil, beeswax, and sunflower lecithin, THC soap infused with a scent-free hemp soap, 5 mg/mL, and a hair oil with THC distillate dissolved into jojoba oil, 5 mg/mL. The patient was advised to apply the cream and oil to patches on body skin and to use the oil on the hair-baring areas daily as well as to use the soap when showering. The patient reported improvement within two days of initiating this regimen. Following 2 weeks of use, the patient reported continued improvement and clearance (Figures 1B and 1D). Two months after beginning treatment, the patient’s wife reported that he was only using the products once a week at the first sign of a flare, saying that the symptoms resolved quickly, and he did not require further medication for the next week.

Seven months after initial use, the patient reported that he continues to use the products regularly for maintenance; he uses the soap to prevent activity of areas with high density of hair follicles and follows up with the creams every few days to control skin dryness. 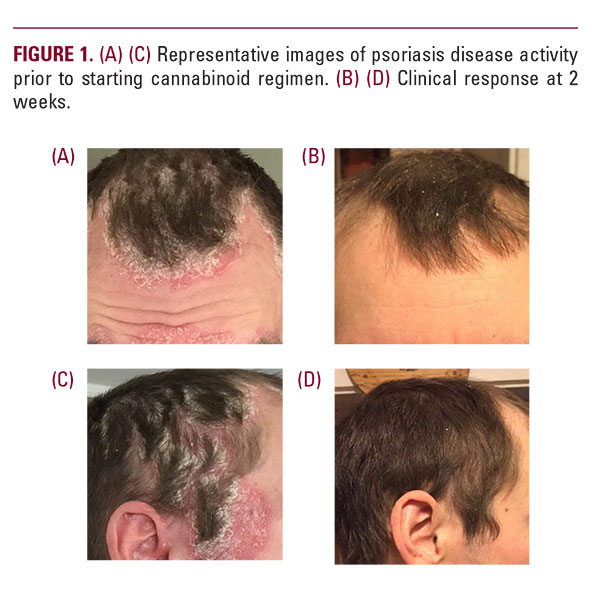