Periorificial dermatitis (POD), also called perioral dermatitis, is described as tiny erythematous papules and pustules on a background of pink dry patches that appear almost eczematous. The eruption often occurs around the orifices of the face such as the mouth, nose, or eyes. Patients often describe pruritus or a burning sensation to the affected areas. While the pathophysiology of POD is not well understood, it is considered a variant of rosacea and its histopathology is similar to rosacea.1 Correlation to topical steroid misuse and changes in facial cosmetics, lotions, and washes have been reported.1,2 An association with fluorinated mouthwashes and toothpastes, as well as with inhaled corticosteroids has been suggested.2

Typical treatment for POD includes discontinuation of the offending agent (if known) as well as discontinuation of all facial topicals.3 Mild disease may be treated with topical metronidazole or topical pimecrolimus. More severe disease is often treated with oral doxycycline.1,2,3 Since doxycycline is a broad-spectrum tetracycline, clinicians must take special consideration for patients with inflammatory bowel disease (IBD). Adverse gastrointestinal effects of doxycycline may be more pronounced in patients with IBD.4 Broad spectrum antibiotics may also cause gut flora dysbiosis that can have long lasting consequences - persisting even after stopping doxycycline.5,6 This case reports a significant improvement of POD in a patient with underlying Crohnâ€™s disease using oral sarecycline, a relatively new, narrow-spectrum tetracycline that has not previously been reported for use in POD.

A 31-year-old female with underlying Crohnâ€™s disease was evaluated via telemedicine for dry pink scaling patches at her oral commissures that were believed to be consistent with angular cheilitis. Triamcinolone acetonide 0.1% topical ointment for no more than five days of use was recommended. Her skin completely improved, and she discontinued the triamcinolone within five days. Approximately thirteen days later, the patient noted self-described â€œblisters to the cheeks and around lipsâ€. She was seen in clinic twenty days after her telemedicine visit for a burning sensation and a large pink shiny patch around her mouth and many tiny satellite pink papules on her cheeks (Figure 1). A punch biopsy was performed, and histopathology was consistent with the suspected diagnosis of POD. Careful consideration of treatment was discussed with the patient due to her underlying Crohnâ€™s disease. The patient reported that she took oral doxycycline in the distant past just prior to her inflammatory bowel disease diagnosis. At the time of presentation of her rash, her Crohnâ€™s symptoms were well controlled with infliximab 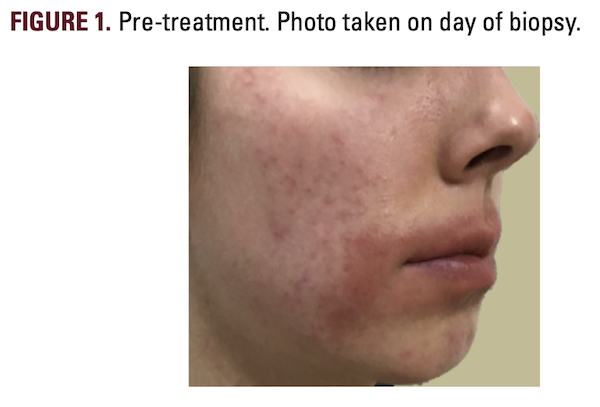