Abstract
The authors report a case of a patient who presented with thick, indurated, hyperpigmented plaques of the bilateral upper and lower extremities, ultimately discovered to be attributed to nephrogenic systemic fibrosis. The case was written to highlight the clinical manifestations of nephrogenic systemic fibrosis, as well as to make dermatologists aware of this disease, their role in diagnosis and management, and review treatment options.

A 60-year-old male with hypertension complicated by end-stage renal disease (ESRD), on hemodialysis, presented with a 9-year history of sclerotic skin. The patient also had a history of renal cell carcinoma, status post nephrectomy, and a failed renal transplant 10 years prior. Between 1999 and 2000, the patient underwent three magnetic resonance imaging (MRI) studies of the kidneys using gadolinium- based contrast agents to work up his failing transplant. Five months later, he developed hyperpigmented sclerotic plaques on his lower extremities, which progressed to involve the upper extremities over several months. Over time, significant contractures impaired the patient's ability to fully straighten his hands and legs. He eventually became wheelchair-bound and was referred to the dermatology clinic for evaluation.
Upon initial evaluation, the patient was found to have extensive hyperpigmented sclerotic plaques over all four extremities (Figures 1 and 2). Contractures were noted in the right hand and behind the left knee. Although largely asymptomatic, the patient did note occasional nocturnal pruritus associated with his contractures. Punch biopsy of the left forearm showed thickened dermal collagen bundles, some surrounded by increased numbers of fibroblastic processes, and spindled fibroblasts extending into the subcutaneous fat and fascia consistent with nephrogenic systemic fibrosis. The patient was started on ammonium lactate and pramoxine and was referred for physical therapy. He achieved only mild improvement on this therapy, but declined any aggressive treatment on followup visit as his disease was stable.
Nephrogenic systemic fibrosis (NSF) is a progressive fibrosing disorder that occurs in patients with severely diminished renal 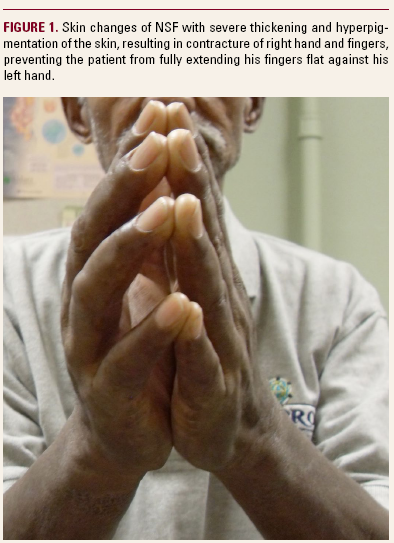 function as a result of exposure to gadolinium-containing contrast agents (GCCAs) during imaging procedures.1