An African-American male, aged 60 years, presented with a 2-month history of asymptomatic nodules on his buttocks and thighs. On examination, there were 5 firm, nontender, subcutanteous nodules measuring approximately 1 cm x 0.5 cm without any overlying surface change. There was no lymphadenopathy.
An excisional biopsy revealed lymphoplasmacytic inflammation within a sclerotic collagenous background (Figure 1). The majority of the cells had plasmacytic differentiation with kappa predominance with mild hyperchromasia and pleomorphism. A B-cell receptor gene rearrangement and flow cytometry did not reveal monoclonality. The histologic differential diagnosis was plasmacytoma vs B-cell non-Hodgkin's lymphoma, particularly extranodal marginal zone lymphoma with plasmacytic differentiation.
A SPEP showed a small monoclonal component of IgG kappa. A skeletal survey did not reveal any lytic lesions. A PET-CT of the torso and pelvis revealed hypermetabolic activity of many subcutaneous nodules primarily in the abdomen and pelvis. A bone marrow biopsy and aspirate did not reveal multiple myeloma or other hematological malignancies
The distribution on PET-CT, absence of bone marrow involvement, and absence of lytic lesions were consistent with a diagnosis of lymphoma. However, the absence of B-cell monoclonality ultimately led to a diagnosis of extra-osseus (extramedullary) plasmacytoma, which was additionally confirmed by a consultation with hematology-oncology
The patient received partial clinical response with 4 cycles of chemotherapy with bortezomib and dexamethasone.

Extramedullary plasmacytomas (EMPs) are rare soft tissue plasma cell tumors without evidence of multiple myeloma at other sites. Accounting for 3% of plasma cell neoplasms, EMPs can be solitary, or rarely, multiple. The median age of presentation is 60 years of age and 75% are male.
Extramedullary plasmacytomas in the skin are most commonly asymptomatic, purple or flesh-colored nodules that can be either superficial or deep in the soft tissue. Of all EMPs, 80% occur in 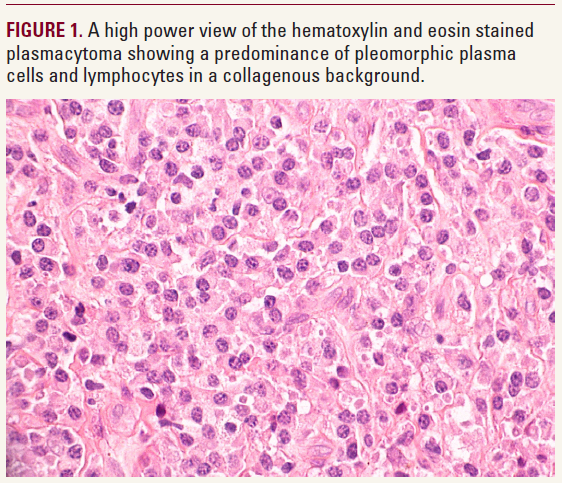 the head and neck and only 3% primarily involve the skin. Skin involvement usually signifies widespread disease.
Solitary EMPs have a better prognosis than multiple EMPs. A small series of 24 untreated individuals with at least solitary disease showed a 40% survival rate at 10 years. However, survival rates improve with treatment. In 18 patients with widespread EMPs who were treated with chemotherapy, 50% had a complete response and 33% had a partial response. The 10-year survival of EMPs treated with chemotherapy remains unclear.

The authors have disclosed no relevant conflicts of interest.