Flagellate erythema has been associated with eating raw or undercooked shitake mushrooms (Lentinus edodes), in association with autoimmune diseases such as dermatomyositis,lupus erythematosus, or Stillâ€™s Disease, and following bleomycin chemotherapy.

A 23 year-old white female presented with a five-day history of a mildly pruritic rash on the upper chest, back, arms, and face (Figure 1a). This occurred 48 hours after ingesting a shrimp and raw shitake mushroom salad. She had no other medical problems. Review of systems was significant for a 24-hour history of mild wheezing. There were no arthralgias or muscle weakness. Physical examination revealed linear streaks of erythema on the ventral wrists, left shoulder, upper chest, and back with violaceous edema of the eyelids and macular erythema of the cheeks. Dermatographism on her back was elicited in the office (Figure 1b). ANA was negative. A three-week tapering course of prednisone led to complete resolution of the rash.

Shitake mushrooms, though once primarily consumed in Asian countries, are now the second most common mushrooms ingested worldwide. Lentinan, a protein in the cell wall of these mushrooms, induces shitake dermatitis. Fully cooking the mushroom inactivates this protein through a conformational change preventing the development of flagellate erythema.1
While the pathogenesis is not well understood, lentinan has been shown to increase IL-1 secretion and subsequent vasodilation. 2 Previous case reports emphasize that while koebnerization may explain the flagellate appearance of the rash, dermatographism has not been present. We hypothesize that mast cells transiently activated in the setting of lentinan, release histamine (dermatographism) and a cascade of cytokines that produce the persistent flagellate erythema of shitake dermatitis. The dermatographism is a transient phenomenon not present at the later stage when most patients visit their physician. This would be consistent with the non-specific histopathology (spongiosis, elongated rete ridges, dermal edema, and perivascular mixed cell inflammatory infiltrate) described in shitake dermatitis.3
A careful clinical history is required to confirm a diagnosis of shitake dermatitis in patients who present with flagellate erythema. Transient dermatographism early in the course does not preclude this diagnosis and, in fact, may be a clue to explain the classic flagellate erythema identified in these patients. 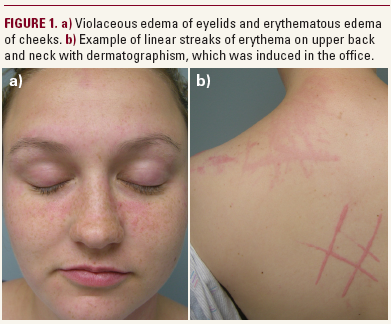 Dr. L. Brodell wrote the first draft of this manuscript. Dr. M. Anadkat reviewed and approved the content of the final draft. This case has not been previously published in the literature.

Drs. Brodell and Anadkat have no relevant conflicts of interest.