Abstract
A four-day old Hispanic female was transferred to our institution from an outside hospital for management of hemolytic anemia and a rash on her abdomen. She was born at 35 weeks to a 33-year-old G4P4 (pregnant four times, gave birth four times) mother by urgent C-section for preterm labor. The baby was noted to be jaundiced at birth with an elevated direct bilirubin of 16. She additionally had thrombocytopenia and elevated liver function enzymes. A positive direct Coombs test and maternal antibody screen confirmed erythroblastosis fetalis (or hemolytic disease of the newborn) as the cause of her hemolytic anemia. Quadruple phototherapy was initiated on the babyâ€™s first day of life.
The patient received intravenous immunoglobulin on days 1 and 2 of life for a total of three doses. In addition, she was given a red blood cell transfusion for anemia via umbilical catheter, receiving furosemide before and after transfusion. On day 4 of life, an erythematous eruption was noted on the patientâ€™s abdomen. The umbilical catheter was removed due to concern for infection, antibiotics were initiated, and the patient was transferred to our facility for management of a suspected infection. At our institution, phototherapy was discontinued and the patient was given an exchange transfusion. Dermatology was consulted.
On exam, the patient had a well-demarcated violaceous and purpuric non-blanching patch on her abdomen and chest with minimal involvement of her extremities (Figure 1). The rash was accentuated on the central abdomen and chest corresponding to the areas most directly exposed to phototherapy lights. There was distinct sparing of sites previously covered by the umbilical catheter and cardiac monitoring electrodes. There were no vesicles or bullae present. A skin biopsy from the abdomen was performed.
Histopathology revealed extravasated erythrocytes in the superficial dermis with no interface reaction or spongiosis of the epidermis. There was no necrosis, vasculitis or vesiculation (Figure 2).
Urine and plasma porphyrin levels revealed elevated plasma coproporphyrin and protoporphyrin and elevated urine uroporphyrin and coproporphyrin. Fecal coproporphyrin was within reference range.
The patientâ€™s hemolytic anemia was treated with exchange transfusion with no phototherapy. The rash resolved over the course of one week with supportive care and reduced ex- 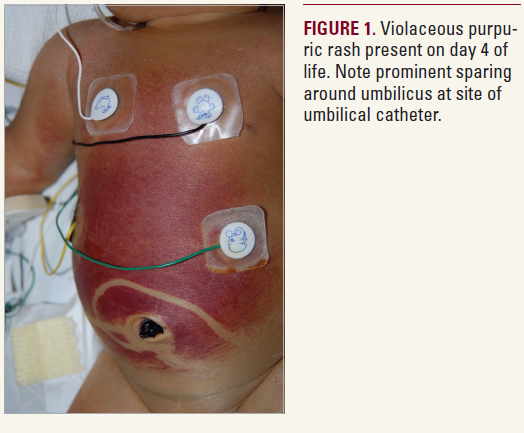