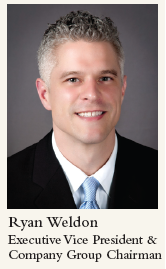 One in three women in the United States experience domestic violence in their lifetime. This staggering statistic affects all Americans regardless of racial, social or religious background. Domestic violence is all around us, but seldom addressed. Valeant Pharmaceuticals has joined efforts with the National Coalition Against Domestic Violence (NCADV) in an unprecedented national awareness campaign to shed light on this national â€˜epidemicâ€™. JDD Marketing Director, Giselle Diaz Campagna sat down with Ryan Weldon, Valeant Pharmaceuticals Executive Vice President & Company Group Chairman, to discuss the campaign and the rationale behind their outreach to the dermatology professional community and their patients.

JDD: What are the goals for the campaign to support the National Coalition Against Domestic Violence and how does this effort fit within Valeant Pharmaceuticalâ€™s mission?

RW: To a large extent, we started by thinking about our customers -- both the patients who are the ultimate consumers, as well as the doctors and other healthcare providers. We were thinking of things we could do to help us align with our customer base and support causes that are important to them. One common theme you see, particularly in the aesthetics realm, is the empowerment of people through providing them increased levels of self-esteem. In dermatology, the majority of the patients, a growing portion of physicians, and a large portion of our employees, are women, whom this cause really resonates with. Partnering with our customers gives us an opportunity to bring everyone together to make an impact for a cause we all believe in. With this campaign we hope to increase awareness and support and our goal would ultimately be to reduce the prevalence of domestic violence.

JDD: Your consumer base inspired you, but what is your personal connection to this cause?

RW: I think every person, whether they realize it or not, knows someone who has been impacted by domestic violence. Many times we just donâ€™t know who those people are. I worked with Americorps in a number of communities where domestic violence was all too prevalent. I have known colleagues that have been affected by domestic violence and weâ€™ve really made efforts to assist and help them. We often take for granted how important it is to feel safe when you go home at the end of the day. Itâ€™s disturbing to think there are so many people that donâ€™t get that feeling. We are all responsible for addressing this problem and there is a lot of power in uniting as a community to make a difference.

JDD: Domestic violence is such a serious and widely spread problem, yet there is still a lack of awareness about how deeply this issue impacts all levels of society. Are there any facts about domestic violence that you could share that would surprise our readers?

RW: The thing that sticks out to me is that one in four women will experience domestic violence at some point in their lives. Another fact is that one in twelve women have been stalked and 81% of those are physically assaulted by the person stalking them. Perhaps the most disturbing statistic is that one in three female homicide victims is killed by a domestic partner. And we canâ€™t forget that some of these statistics are actually under-reported. We need to raise awareness. October was domestic violence awareness month but I think we saw more emphasis on other causes throughout the month. NCADV and individuals that have been working on this cause have a great opportunity to further their efforts with this program.