Abstract
Strongyloidiasis is caused by the roundworm Strongyloides stercoralis (S. stercoralis). It is uncommon in the Unites States, and most cases are brought by travelers who have visited or lived in South America or Africa.1 Individuals with an intact immune system may experience mild gastrointestinal symptoms or none at all. In contrast, those with a compromised immune system may develop a rapidly fatal infection, commonly referred to as hyperinfection syndrome or disseminated Strongyloidiasis. We present a 66-year-old inmunocompromised male with Pemphigus Foliaceus who was admitted to the intensive care unit in critical condition and in whom a skin biopsy proved to be the main tool in the diagnosis of Strongyloidiasis.

A 66-year-old man from Guyana, who had been living in the United States for twelve years, was treated with prednisone 60 mg orally daily for approximately one year, for his Pemphigus Foliaceus (biopsy and immunofluorescence confirmed). Importantly, the patient had a baseline unexplained anemia, and underwent esophagogastroduodenoscopy and colonoscopy with biopsy to determine etiology of his low red blood cell counts. These studies were negative, and he was initiated on MMF 1 gram orally twice-daily in addition to oral prednisone.
He was subsequently admitted to our institution complaining of abdominal pain, nausea and diarrhea. His hospitalization was complicated by the development of acute respiratory distress syndrome and gram negative sepsis, requiring transfer to the intensive care unit. The chest radiograph showed diffuse bilateral pulmonary infiltrates and initial laboratory evaluation showed hemoglobin of 6.0 g/dl (12.4-14.9). Ultimately, he required broad spectrum antibiotics, multiple transfusions, and respiratory and cardiovascular support. Three days after the admission the patient developed numerous disseminated purpuric papules and plaques with pink to violaceous reticulated patches over the abdomen and thighs (Figure 1). A biopsy obtained from an abdominal lesion showed scattered filariform larvae as well as red blood extravasation consistent with S. stercoralis larvae, without evidence of vasculitis (Figure 2).
The sputum cytology also showed worm larvae consistent with SS. He was treated with daily oral doses of ivermectin 200 µg/kg 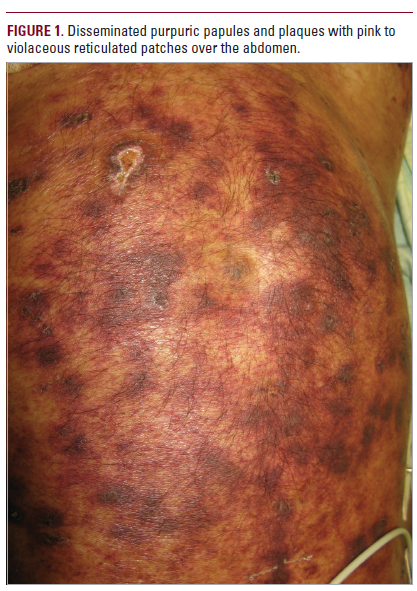