The patient was a 58-year-old, non-Hispanic, Black male with moderate psoriasis (Investigator’s Global Assessment [IGA]=3) and affected body surface area (BSA) of 10% at baseline (Table 1). The patient was enrolled in a phase 3, randomized, doubleblind, vehicle-controlled study that assessed HP/TAZ lotion in participants with moderate-to-severe psoriasis (NCT02462070); detailed methodology and study results have been previously published.14,15 The patient, randomized to HP/TAZ for 8 weeks with a 4-week posttreatment follow-up, was instructed to apply a thin layer of HP/TAZ lotion once-daily over all affected areas.

The target lesion (Figure 1), located on the upper right arm, was 99 cm2 in size at baseline; prominent keloid scars were also apparent. The patient also had an additional non-target lesion treated with HP/TAZ during the study (Figure 2). At baseline, both lesions appeared as classic psoriatic elevated plaques covered with white/silvery scales. By week 2 of HP/TAZ treatment, scales had diminished, though affected skin was hypopigmented in the center with hyperpigmentation at the border of the psoriatic plaque resolution. The degree of hypopigmentation appeared to be greatest at week 4, with skin pigmentation nearing normal by week 8. At 4 weeks posttreatment, the affected skin area had returned to normal with small regions of hyperpigmentation, the greatest around the periphery of the affected skin lesion.

The patient achieved treatment success with HP/TAZ lotion, with an improvement to ‘almost clear’ at week 4 that was maintained posttreatment at week 12 (Table 1). Improvements 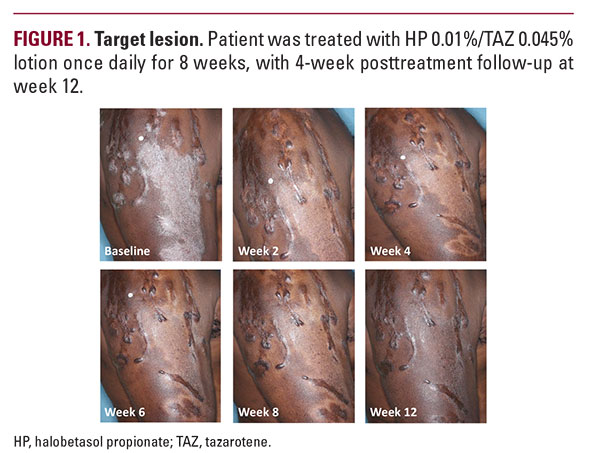 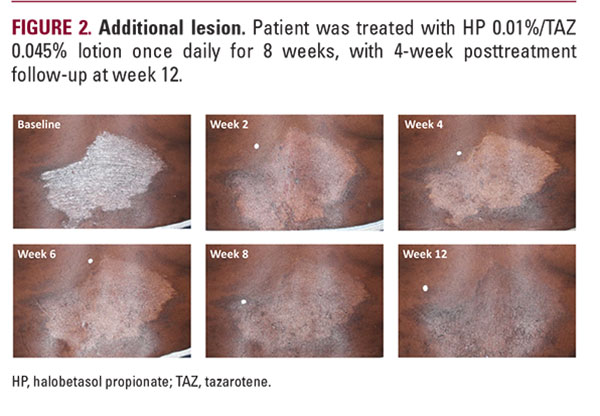