The Impact of Pharmacy Benefit Managers on Drug Pricing 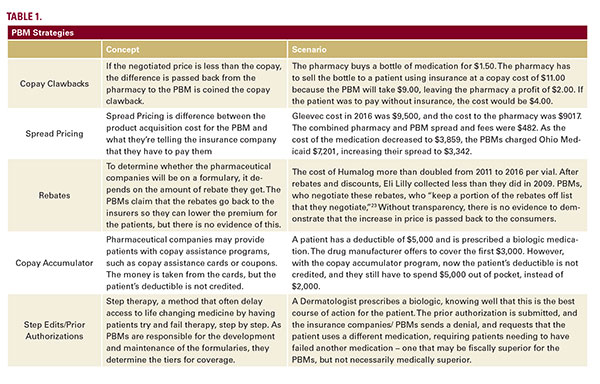 the market currently costs around $4,000. When the medication was originally priced at $575, the medication was largely unable to be covered. Per Spencer Williamson, the CEO of Kaleo at the time, the company raised the price to $4,000 based on roadblocks set by PBMs. The PBMs discouraged physicians from prescribing Evzio at the $575 price tag and said that patients had to try and fail another form of naloxone (despite the fact that it would be fatal if patients failed another form of naloxone). Once the price was raised more than 550%, patients began to have access to this medication, jumping from 5,000 filled prescriptions in the first 12 months to 65,000 prescriptions filled over the next 12 months.13 The bottom line for PBMs may not correlate with positive patient outcomes.

Legislation
It is clear that change needs to occur to lower drug prices for our patients. To make the change and impact, a grassroots effort needs to be made by prescribers and patients alike. To make some of these changes, advocating for legislative fixes should be a priority. In 2018, promising proposals such as H.R. 1316 – Prescription Drug Price Transparency Act and S. 637 – Creating Transparency to Have Drug Rebates Unlocked did not get anywhere. Those proposals had to be re-proposed as the H.R.1035 – Prescription Drug Price Transparency Act 116th Congress and S.476 – Creating Transparency to Have Drug Rebates Unlocked (C-THRU) Act of 2019. However, it is troublesome to see that, according to opensecrets.org, high campaign contributions to political parties are from PBMs, including UnitedHealth group, Aetna (which CVS merged with), and formerly Express Scripts.20-21 The contributions are nearly split down the middle between Democrats and Republicans, indicating their influence regardless of who is elected. In addition, in April 2019, Pharmacy Benefit Managers were set to testify in front of the U.S. Senate Committee on Finance to answer how PBMs impact the cost of prescriptions. It’s disconcerting to find that 27 of the 28 senators had accepted money from the PBMs, some even receiving personal donations.22

PBMs are intertwined with every step of a patient’s journey to get treatment. From the highest level, PBMs have influence legislatively. On the patient level, the majority of PBMs are now part of insurance companies and are even in local pharmacies. Exposing the suspected price gouging techniques – copay clawbacks, spread pricing, rebates, copay accumulator cards, and step edits – can be key to familiarizing ourselves with the complicated high cost of a prescription. As patients and prescribers, we must make a grassroots effort to demand greater price transparency and change from our government.