Clinical and Molecular Effects of Interleukin-17 Pathway Blockade in Psoriasis 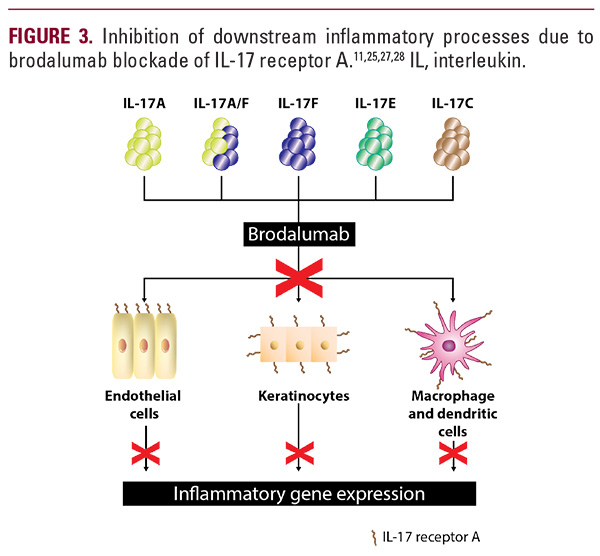 Pharmacologic Effects of IL-17 Pathway Inhibition in Psoriasis
In early-phase human studies, brodalumab normalized psoriatic gene expression profiles and led to significantly decreased keratinocyte hyperproliferation, reduced epidermal thickening, and fewer numbers of infiltrating T cells in the skin of patients with psoriasis.28,33 Within 1 week, expression of IL-23 and IL-12 subunit genes was reduced, indicating that brodalumab may reduce inflammatory markers upstream of IL-17 receptor A.28,34 Within 2 weeks, IL-17A, IL-17C, and IL-17F were downregulated in a dose-dependent manner.28 In a punch biopsy subset of patients enrolled in three phase 3 clinical trials of brodalumab, extensive improvement in clinical features of psoriasis was accompanied by near-complete resolution of histologic and genomic features of psoriasis, including a transcriptome of lesional skin that resembled nonlesional skin after brodalumab treatment.34

In an early study of secukinumab that included patients with plaque psoriasis, reductions in clinical disease activity were associated with reductions of histomorphologic signs of acanthosis and epidermal hyperplasia and changes in gene expression of IL-17A pathway markers.35 For example, expression of IL-17A and IL-22 was markedly reduced after secukinumab therapy, as was the area occupied by dermal IL17A+CD3+ T cells.35

Skin lesions from patients with psoriasis in a phase 1 study of ixekizumab demonstrated significant dose-dependent reductions from baseline in keratinocyte proliferation, hyperplasia, epidermal thickness, and dermal and epidermal infiltration by T cells and dendritic cells.36 These changes were accompanied by decreased expression of cytokines from multiple T-cell subsets, including interferon-γ, IL-17A/F, and IL-22 and the dendritic cell cytokine IL-23.36