A 63-year-old African American female (Fitzpatrick V) presented with a twenty-year history of hair loss. Patient had a long history of hypothyroidism – stabilized on levothyroxine for twenty years, as well as congestive heart failure and hypertension, for which she had been taking Spironolactone 25mg daily, also for many years, without change in her hair loss patterns. The remaining medical history includes atrial fibrillation and hypercholesterolemia and additional medications include carvedilol, ramipril, and pravastatin. She had no history of itching or pain in the scalp and no family history of hair loss. Patient denied any history of prior medical, surgical, procedural, or supplement interventions for hair loss and wore weaves for coverage of affected areas. On clinical exam, she was found to have thinning encompassing the frontal and occipital areas, and most notably patchy alopecia of bilateral temporal line. No scarring, scaling, or redness were noted. Dermoscopy exam revealed thick and thin variability of hair shaft diameter, indicating miniaturization. Diagnosis of androgenetic alopecia was given. The patient was interested in a non-invasive approach with little side effects. A multi-targeted approach using a combination of standardized botanical ingredients found in Nutrafol supplement was the suggested treatment course. Photographs show before treatment and 3-months after taking 4 capsules daily result. There was marked improvement with new growth seen on bilateral temporal areas, and some regrowth on frontal and occipital areas on exam. The patient also reported a noticeable improvement. (Figure 2) 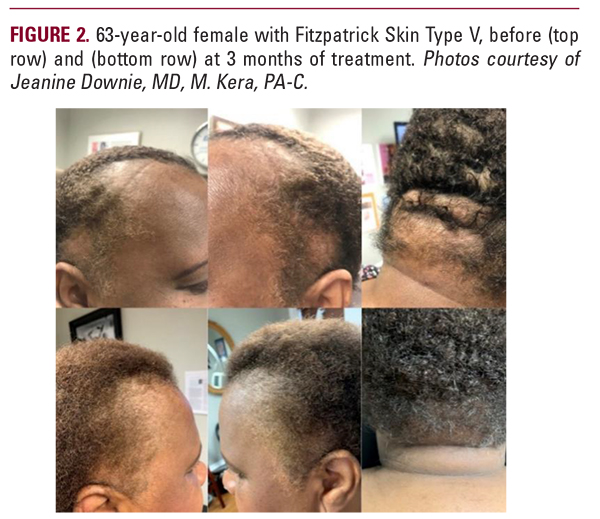 A 50-year-old postmenopausal African American female (Fitzpatrick IV) presented with mild pain, moderate itching, and massive shedding of scalp hair for 3 months. She had been using OTC shampoo, conditioner, and keratin strengthening products, as well as color-treating her hair every 4-6 weeks, and no history of new styling practices. The patient reported extreme stress due to massive shedding of scalp hair. Patient was on topical minoxidil and spironolactone 50 mg daily for hair loss, in addition to fluocinolone acetonide 0.05% as needed for itching and tender scalp.

On physical exam, the patient was noted to have color-treated thinning hair and mild erythema of the scalp, with a positive hair pull test. Microscopic examination revealed normal appearing telogen follicles. The hair shafts were without fractures and tensile strength was normal in recoil. The patient was placed on Nutrafol supplement 4 capsules daily for 3 months after experiencing the recent massive hair shedding, melatonin 3 mg at bedtime, and oral antibiotics for mild folliculitis symptoms for 1 week. The pain, itching, and shedding ceased and 2 months following the start of therapy the “after” photograph was taken. During the interim, she color treated her hair 1 month prior and had noted significant hair regrowth from the time of her previous coloring treatment. No side effects were experienced with the prescribed therapies. She is delighted at the results of accelerated hair growth (Figure 3). 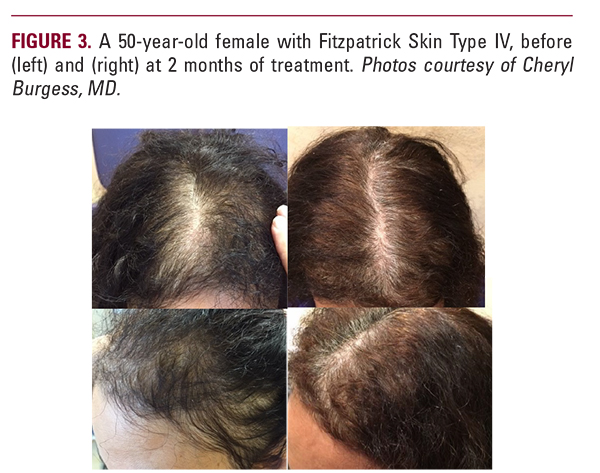 A 55-year-old African American female (Fitzpatrick V) presented with a painful throbbing sensation and thinning in the bilateral temple area. Previous interventions included hair strengthening shampoos, minoxidil, and Vitalize hair serum, without improvement. On physical examination, there was distinct alopecia with thinning and tenderness to palpation at bilateral temple areas with a positive hair pull test. Differential diagnoses considered were possible early central centrifugal cicatricial alopecia or traction alopecia. Previous therapies were discontinued, and she was started on a 4-week course of doxycycline 100 mg and