Dupilumab in Dermatology: Potential for Uses Beyond Atopic Dermatitis

tor global assessment (IGA) scores, and in patient reported outcomes including pruritus (Table I). Many of these patients had histories of atopic dermatitis. In addition, the majority of patients that investigators treated with dupilumab for allergic contact dermatitis had moderate or severe baseline disease, with average baseline IGA scores of 3.2±0.7 (1 standard deviation) in one study and mean body surface area (BSA) involvement of 48 ± 19.9% in another study.7,8

Hand Dermatitis
Reports generally described improvements in hand dermatitis on dupilumab. Various types of hand dermatitis were described in articles including allergic contact dermatitis, atopic hand eczema, and dyshidrotic eczema. Cases where dupilumab was chosen for this indication involved severe baseline disease or recalcitrant cases (Table 1). The largest study included 38 patients with hand dermatitis of various etiologies. It reported that the majority of patients improved in terms of IGA scores, and in subjective reports of pruritus and pain from hand fissures (Table 1).9 Isolated reports also describe successful use of dupilumab for highly recalcitrant hand dermatitis, resulting in improvement in patients who had previously failed multiple treatment modalities including oral immunosuppressants.10
Chronic Spontaneous Urticaria
One case series described 6 patients with histories of atopic dermatitis who failed omalizumab and were subsequently trialed on dupilumab, with all 6 patients sustaining improvement. 11 Dupilumab is now being studied in randomized clinical trials for chronic spontaneous urticaria (CSU) and cholinergic urticaria (Table 2).

Prurigo Nodularis
Small case series reported improvement in patients with prurigo nodularis in terms of subjective itch ratings, and in lesion number and size. In addition, concomitant therapies were able to be weaned (Table 1). 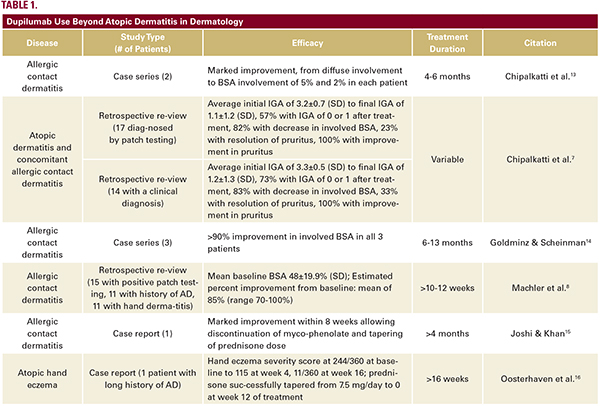