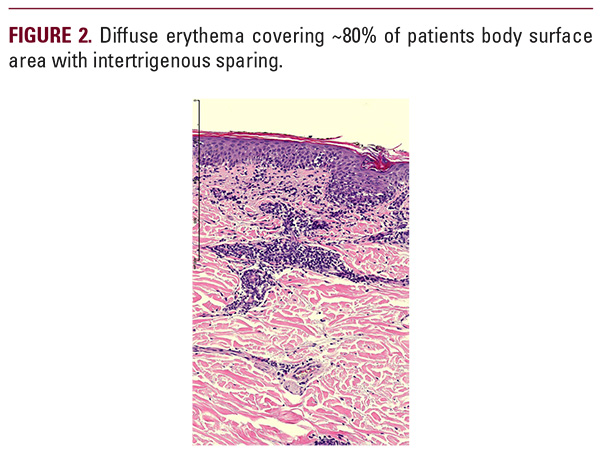 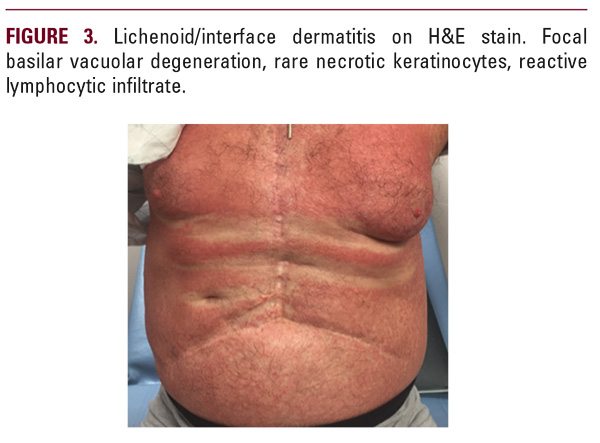 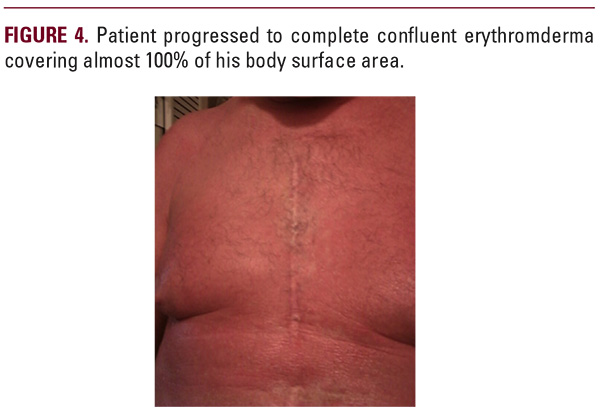 tissue disease versus drug-induced lupus-like reaction. Despite a third prednisone pulse and topical steroids, he presented to the dermatology clinic with 80% BSA involvement (Figure 3). Further investigation demonstrated a temporal association after each infliximab infusion and a global progression as the dose per infusion increased. Additional serologies were negative for anti-double stranded DNA and anti-histone antibodies. Repeat skin biopsy confirmed a LID.

Over the next week, his condition rapidly progressed to erythroderma, diffuse non-scarring alopecia, and painful palmoplantar keratoderma. Systemically, he reported fatigue, anorexia, weight loss, myalgias, and arthralgias. These symptoms, combined with an interface dermatitis (histologically characteristic of connective tissue diseases), raised concern for an infliximab-mediated drug-induced lupus. A fourth prednisone pulse was initiated, and infliximab infusions were held. As before, he clinically resolved, however on completion of taper his rash flared, his alopecia worsened, and he developed Raynaud’s phenomenon. Therefore, a decision was made to hold prednisone at a stable dose and add hydroxychloroquine.

Despite concurrent hydroxychloroquine for 2 months and interruption of infliximab for 3 months, his erythroderma persisted (Figure 4). Consequently, hydroxychloroquine was discontinued, cyclosporine was initiated (4mg/kg in two divided doses), and he was tapered off prednisone. This led to rapid, complete resolution of the rash and all associated symptoms. Ultimately, he was diagnosed with a paradoxical TNF-α induced drug eruption as opposed to a flare of underlying plaque psoriasis or a drug-induced connective tissue disease.

Dermatologic side effects are both significant and clinically relevant in patients treated with TNF-α inhibitors.5 Cutaneous findings have been recorded in up to 60% of patients treated with TNF-α inhibitors for rheumatoid arthritis.6 Paradoxically, despite psoriasiform and lichenoid eruptions often responding to TNF-α blockade, reports of drug-induced lichenoid and psoriasiform dermatitides have also been reported.5 Often, clinical improvement can be provoked by discontinuing or switching the biologic agent, or with a short course of oral corticosteroids.6

Analogous to the multiplicity of clinical findings induced by TNF-α inhibitors, numerous histopathologic patterns have also been observed, however, lichenoid interface dermatitis (LID) appears to be a most common class-dependent finding.7 Infliximab, adalimumab, and etanercept, all of which have FDA-approved dermatologic indications, have been associated with LID on histopathology.3 Another notable and interesting feature of these drug reactions is the disconnect between the clinical exam and the histopathologic pattern.3,4 For example, many patients with TNF-α-induced drug reactions have clinically “lichenoid” eruptions and, predictably, LID on histopathology. However, other distinct clinical presentations also show LID.