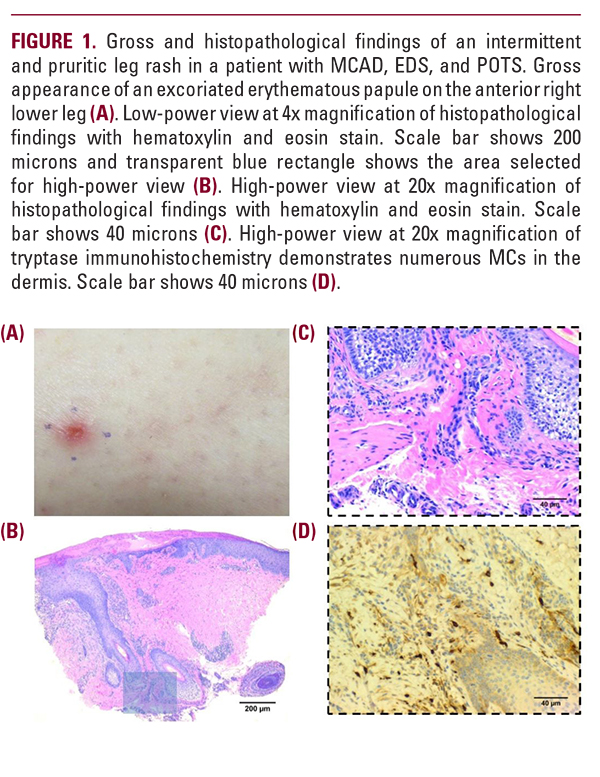 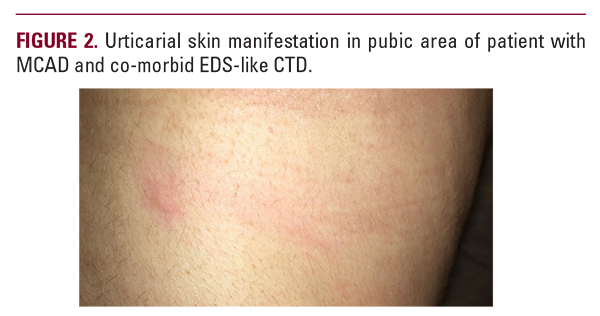 Cutaneous Manifestations of iMCAS: Bringing Together the Evidence

Notably, 413 of 562 patients included in cited reports were from a single study.14 Excluding this single large study, the mostcommon dermatologic sequelae described included flushing in 34.9% of patients (52/149), pruritus in 32.2% of patients (48/149),clotting dysfunction or bleeding disorder in 28.2% of patients (42/149), and urticaria or hives in 14.1% (21/149) patients. Recently, in the aforementioned largest study of iMCAS patients to date, Afrin et al reported pruritus and urticaria to affect asmany as 63% of the 413-patient sample.14 Results also conveyed that the other most common dermatologic findings in iMCAS include dermatographism (76% of patients), edema (up to 56%), unspecified rash (up to 49%), sweats (up to 47%), bruising (upto 39%), and flushing (up to 31%) (Table 2).14 Alopecia and onychodystrophy were symptoms in 15% and 13% of patients, respectively (Table 2).14

Familial hypertryptasemia and MCAD variants, including iMCAS, have been observed in association with CTDs.27,28,43–45 Lyons et al studied 33 atopic patients with persistently elevated serum tryptase and found an initially found a high prevalence of CT abnormalities (23 patients).45 Flushing and episodic urticaria, as shown in Figure 1, was noted in 26 patients.45 Further, 17 patients had history of itch, while 5 patients had history of angioedema.45 In a subsequent study investigating the genetic basis for CT abnormalities in patients with familial hypertryptasemia, Lyons et al discovered that increased copy number of TPSAB1, a gene encoding for α-tryptase, coincides with inherited increased basal serum tryptase levels.44 Although familial hypertryptasemia is likely a distinct entity from MCAD, these findings are highly relevant as they demonstrate a potential etiology of CTDs occurring in iMCAS and MCAD, which may also be mediated by products of MC degranulation.27,28,44 Indeed, in the author’s own experience, histopathological examination of an erythematous papule from a patient with MCAD and EDS symptoms demonstrates prominent staining with tryptase immunohistochemistry (Figure 2).MMPs are also released from MCs and are tryptase-activated enzymes directly involved in breaking down extracellular ma