Proximal Subungual Onychomycosis in the Immunocompetent: A Case Report and Review of the Literature 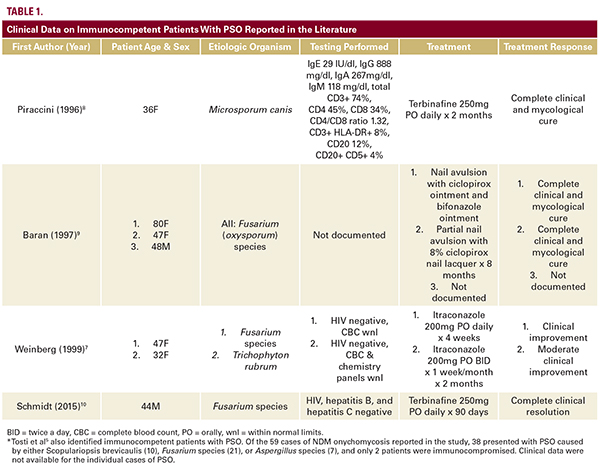 but further investigation has identified them as a noteworthy cause of PSO.5,6 Our patient, although fungal culture was not obtained, demonstrated mild erythema and paronychia of his affected digits, suggesting his PSO may have been caused by a NDM. This would support the growing evidence demonstrating that NDMs can be an important cause of PSO in immunocompetent individuals.PSO is an uncommon disease that is most frequently found in immunocompromised patients. Dermatophytes are the most common cause, while NDMs can also provoke the disease. This case of PSO highlights the potential for its rare occurrence in a healthy host. However, the clinical presentation of PSO should always trigger an evaluation for possible immunodeficiency illnesses.

The authors have no relevant conflicts of interest to disclose. The authors do not have grants or additional technical support to disclose. This research did not receive any specific grant from funding agencies in the public, commercial, or not-for-profit sectors. This manuscript is not under consideration elsewhere and has not been previously published.