Safety and Tolerability of Ixekizumab: Integrated Analysis of Injection-Site Reactions from 11 Clinical Trials 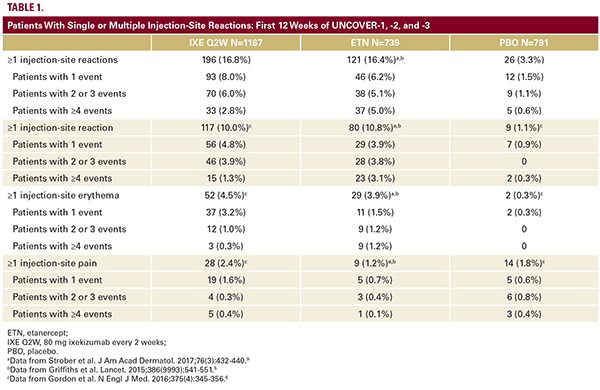 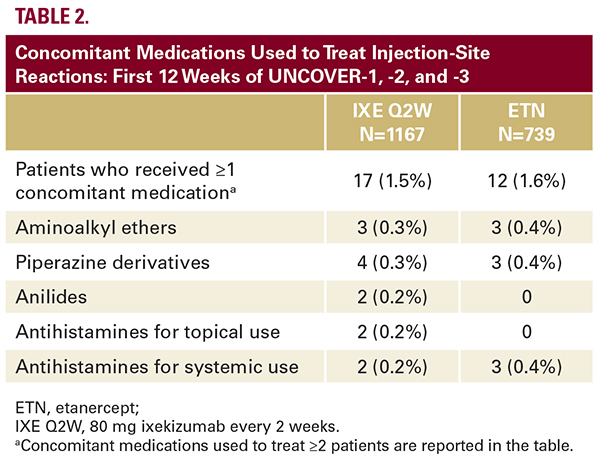 injection-site pain occurred during and resolved shortly after the injection of ixekizumab (median time to onset: 1.0 day; median duration: 1.0 day); however, in a few cases, the resolution of pain took longer.While the frequency of injection-site pain was comparable among ixekizumab- and etanercept-treated patients, more patients treated with IXE Q2W (19.2%) than those treated with etanercept (9.0%) characterized the maximal pain experienced withthe injection as “moderate” to “severe” (Figure 2A). Ixekizumaband etanercept-treated patients characterized the redness and swelling associated with injections similarly (Figure 2B and 2C). Overall, the most common characteristics of pain were “none”and “mild,” of redness were “clearly red” and “noticeable,” and of swelling were “no papule” and “barely noticeable.”A single injection-site reaction event was reported in 93/196 patients (47.4%) in IXE Q2W group and 46/121 (38.0%) in the etanercept group. A total of 103/196 (52.6%) patients in the IXE Q2W and 75/121 (62.0%) in the etanercept group reported multiple events (Table 1).The use of concomitant medications to treat injection-site reactions was uncommon (1.5% of IXE Q2W-treated patients and 1.6% of etanercept-treated patients). Among those who received treatment, the majority received antihistamines (Table 2).Injection-Site Reactions at Any Time During All 11 Ixekizumab Psoriasis StudiesAcross all 11 ixekizumab psoriasis studies, 5689 individuals received at least 1 dose of ixekizumab and 840 (14.8%)