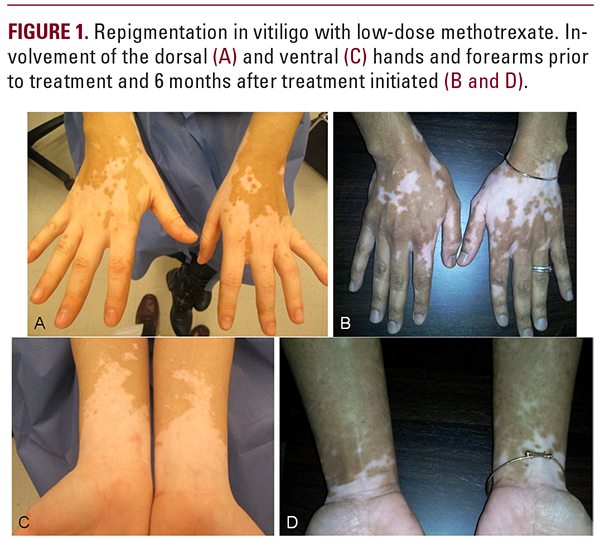 After 7 weeks, he was noted to have improvement with thinner plaques and significantly improved joint pain. His vitiligo, previously unresponsive to 6 months of NBUVB phototherapy, was also noted to show clinical improvement when methotrexate was increased to 20 mg a week and above, after 14 months of therapy. No adverse effects were noted. The patient was lost to follow up after 16 months.Case 3A 26-year-old woman with Fitzpatrick skin type 3 presented to a rheumatologist with a 5-year history of rheumatoid arthritis (RA) initiated on methotrexate 7.5 mg a week 3 years previously. The patient self-discontinued methotrexate due to a concern for hair loss. She noted vitiligo that had been present since childhood but not active in recent years, that subsequently rapidly progressed to involve her face and trunk approximately 5 months after discontinuing methotrexate. She transitioned to sulfasalazine, hydroxychloroquine, and celecoxib for her RA, and then to etanercept, with a desire to avoid methotrexate in her childbearing years. She showed no improvement in skin pigmentation. Eight years later, etanercept was no longer sufficient for her RA. Methotrexate 7.5 mg a week with folic acid supplementation was added back on and increased to 12.5 mg a week. Remission of RA and significant skin repigmentation was noted 1 year after methotrexate initiation with no adverse effects.

Methotrexate is a folate anti-metabolite that competitively inhibits dihydrofolate reductase to inhibit DNA synthesis and repair. Originally developed as an antineoplastic agent, it has also been found to have anti-inflammatory and immunomodulating properties at low doses (5-25 mg weekly) and is FDA-approved for the treatment of psoriasis as well as RA. It Kroshinskyhas been shown by randomized controlled trial and systematic review to be effective in the treatment of RA.3 While the mechanism of therapy is not fully understood, this suggests a role for methotrexate in the treatment of other immune-mediated dermatologic diseases such as vitiligo.4Here we report significant repigmentation in 3 cases of vitiligo treated with low-dose methotrexate, one in which depigmentation was rapidly progressive and generalized. In two cases improvement was concurrent to the treatment of autoimmune arthritis. Improvement was noted as early as 6 weeks to 14 months, in two cases after the failure of a topical calcineurin inhibitor and phototherapy. Repigmentation appeared to be dose-dependent in at least one case. No serious adverse effects occurred in any of the 3 cases.There is limited data evaluating the use of methotrexate as well as other systemic immunosuppressive therapies in vitiligo. Meta-analysis indicates that the literature regarding therapies for vitiligo is broadly limited by study size as well as combination treatment.2 The cases presented here are notable for repigmentation after chronic, longstanding disease course, in one case with documented significant BSA involvement.Methotrexate has comparatively low risk of side effects compared to other immunomodulatory agents, particularly at low doses and with folic acid supplementation5. It presents a promising alternative to long-term topical steroid use, systemic immunosuppression, or in cases in which phototherapy is not easily accessible. Larger scale studies evaluating short- and long-term efficacy of methotrexate therapy will significantly benefit the treatment of this common and psychologically debilitating disease.