The Safety and Efficacy of a Sustainable Marine Extract for the Treatment of Thinning Hair: A Summary of New Clinical Research and Results from a Panel Discussion on the Problem of Thinning Hair and Current Treatments 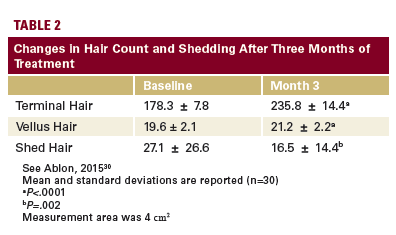 The main component of Viviscal, the marine complex AminoMar ®, was originally identified from the fish- and protein-rich diet of the Scandinavian Inuits in the late 1980’s.27,28 In the 25-year period since then, its efficacy and safety have been demonstrated through a multitude of clinical studies (Table 4). Early studies demonstrated the beneficial effects of Viviscal on both male and female subjects with alopecia areata and alopecia totalis,29 as well as on young men with hereditary androgenic alopecia.28
The use of Viviscal, specifically for women with thinning hair, was pioneered at the Ablon Skin Institute Research Center in Manhattan Beach, CA. In a randomized, double-blind, placebo-controlled pilot study, healthy women between the ages of 21 and 75 with self-perceived thinning hair were randomized to receive Viviscal (n=10) or placebo (n=5) twice daily for 6 months.11 The change in hair count was assessed on a 4 cm2 area of scalp by using phototrichogram imaging. In the treatment group, the mean number of terminal hairs increased by 211% after 3 months of treatment and by 225% after 6 months. Subjects in the treatment group also reported improvements in overall hair volume and scalp coverage, as well as in hair shine and body thickness. Moreover, improvements in skin moisture retention and smoothness were also observed in the treatment group. No AEs were reported.
A follow-up study enrolled 60 women with a mean age of 48.6 ± 10.0 years (range 24-65) who had self-perceived thinning hair associated with poor diet, stress, hormonal influences, or abnormal menstrual cycles.30 Subjects were randomized in a double-blind fashion to receive either a twice-daily dose of Viviscal (n=30) or a placebo (n=30) for 3 months. The change in hair count was assessed on a 4 cm2 area of scalp using phototrichograms. Changes in hair shedding were also measured.
In subjects treated with Viviscal, the mean number of terminal hairs increased by 32% (P<.0001) after 3 months. Moreover, the mean number of vellus hairs also increased by 8.2% (P<.0001) and the shed hair count decreased by 39%
(P=.002) (Table 2). Hair type was defined by hair shaft diameter as vellus-like (≤40 μm) or terminal (≥40 μm). Subjects in the treatment group also had significant increase in the quality of life and self-assessment scores, whereas there was no change among the placebo-treated subjects.30 This is in agreement with previous reports,13-17 elucidated above, that subjects’ self-assessment of the quality and quantity of hair can negatively impact confidence and self-esteem if thinning hair is perceived.
A similar randomized, placebo-controlled study further examined the benefits of Viviscal in reducing the shedding and increasing the diameter of hair in women with subclinical hair thinning or loss. Seventy-two subjects with a mean age of 44 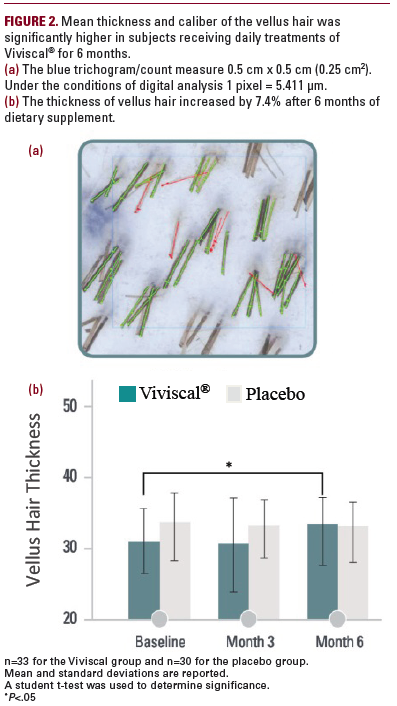