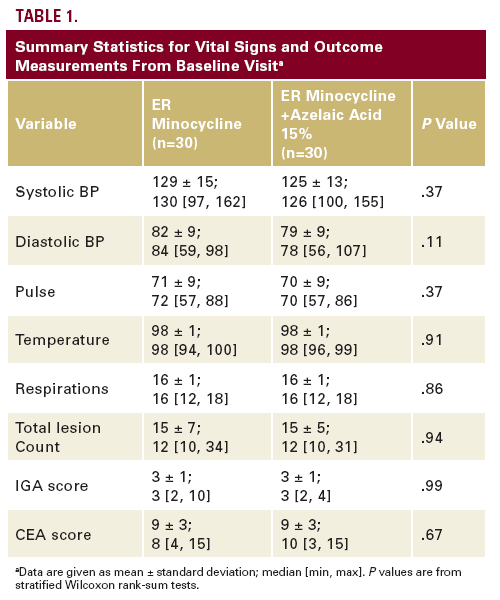 than 2 and subjects experiencing 50% or greater reduction in lesion count by week 12. The CMH test, stratified by study site, was used to compare these outcomes between treatment groups. The number of subjects experiencing an AE was compared with a CMH test, stratified by study site, and the cumulative number of AEs was compared with a Poisson-linked generalized linear mixed-effects model (Poisson GLMM). All analyses were conducted on the ITT population, defined as all enrolled subjects that took at least one dose of study medication. Missing observations for the ITT analysis were imputed by the last observation carried forward (LOCF) method. A sensitivity analysis of the PP population, defined in the Results, was conducted. All hypothesis tests were conducted at the .05 level, and all analyses were conducted using the open source R software program (R Foundation for Statistical Computing, Vienna, Austria, http://www.r-project.org/).

Sixty subjects were enrolled. Thirty were treated with ER minocycline, and thirty with ER minocycline and azelaic acid 15%. Each site enrolled 30 subjects, 15 in each treatment group. All 60 subjects comprised the ITT population. At the screening visit, 12 subjects were taking prohibited medications and thus failed to meet all exclusion criteria. Eleven of these subjects underwent a 2-week washout period before baseline assessment for the prohibited medication, and one 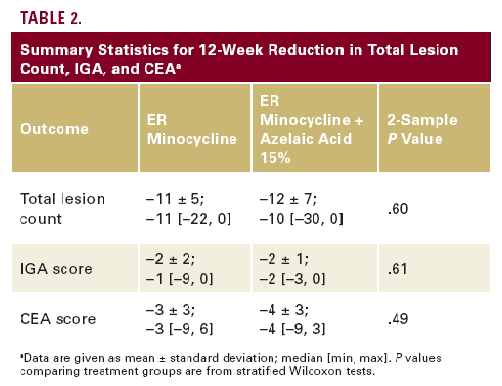 subject received a waiver for exclusion criteria violation. Five observations were imputed by LOCF at the week 12 visit because of missed visits or loss to follow-up, 7 at week 8, and 6 at the follow-up visit (week 16).
Baseline vital signs and study outcomes did not significantly differ between treatment groups (Table 1), so we inferred that treatment groups were well balanced with respect to baseline characteristics.

Summary statistics for 12-week changes in the outcome variables are in Table 2. In both treatment groups, there were significant 12-week reductions in each outcome variable (P<.0001 for all variables in both groups). However, the 2 treatments provided equal reductions in total lesion count (P=.60), IGA (P=.61), and CEA (P=.61).
Seventeen of 30 subjects (57%) in the ER minocycline group and 18 of 30 subjects (60%) in the ER minocycline + azelaic acid 15% group had a week 12 IGA of less than 2. These proportions did not significantly differ (CMH test, P=.50). Fifty-two (87%) subjects, 26 in each treatment group, experienced a reduction in total lesion count of 50% or greater by week 12. There was no significant difference between groups in this outcome (CMH test, P=1.0).