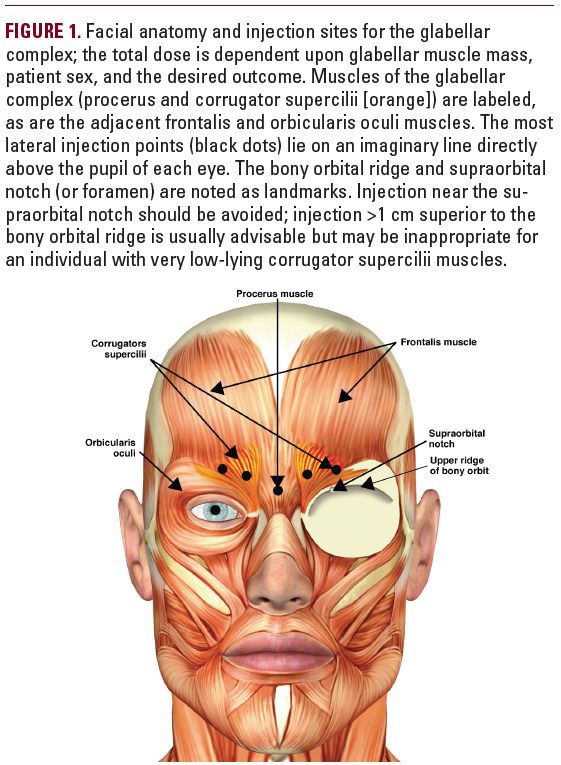 general,men have greater muscle mass than women and may have a greater threshold for response. Therefore, dosing requirements may need to be adjusted by gender to achieve optimal treatment outcomes.12 Additionally, individual variations in muscle mass, position, frequency of use, and contractile strength necessitate the adjustment of dose and injection site location for the optimal treatment of glabellar lines.17,18
Validated objective scales of glabellar muscle mass in men and women have potential value for optimizing dosing early in the course of BoNTA treatment, minimizing the necessity of touch-ups, and reducing the risk of adverse effects. Several scales have been used in clinical trials to measure wrinkle severity in the glabellar area, such as the Facial Wrinkle Scale (FWS),19 which measures wrinkle severity at maximum frown and repose on a 4-point scale from 0 (none) to 3 (severe; validation studies are lacking for this scale), and the Glabellar Line Severity Scale (GLSS),20 which measures wrinkle severity at maximum frown on a validated scale from 0 (no lines) to 3 (severe lines).12 However, these scales do not measure muscle mass per se.
Muscle Mass Scale Validation Study
The validated Medicis Glabellar Muscle Mass Scale (MGMMS) was developed to provide a clinically useful measure of glabellar muscle 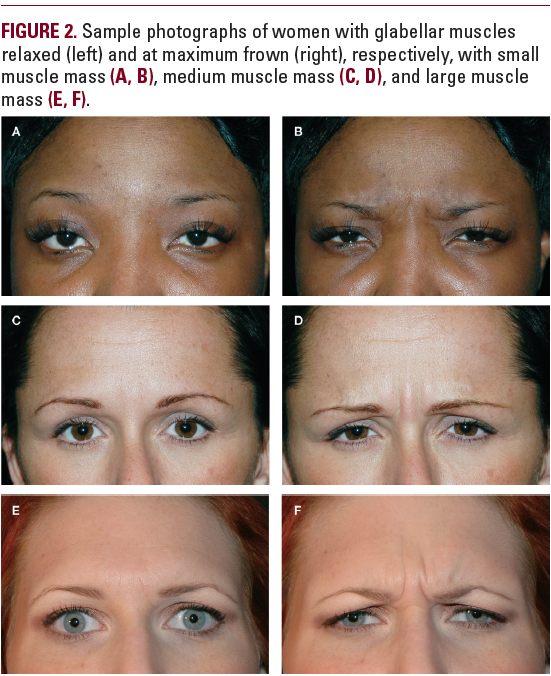 mass when considering BoNTA treatment for facial rejuvenation.12 Medicis Glabellar Muscle Mass Scale scoring uses a 3-point scale (small, medium, and large muscle mass) and takes into consideration 4 specific features of assessment (Figures 2 and 3, and Video):
A validation study was performed to evaluate the within- and between-evaluator performance of the MGMMS. Six experienced evaluators independently examined photographs of 30 women and 30 men. The photographs displayed a frontal view of each subject's forehead and were assigned unique identifying numbers in no particular order. Evaluators made 2 rounds of assessments, separated by at least 2 weeks, using the same set of photographs on each occasion but in a different, computer- randomized order during each session. The within- and between-observer reliability of the MGMMS was demonstrat-