We performed a double-blind, randomized, placebo-controlled study to investigate the anti aging/lifting benefit of a 2.5% THPE-containing cream compared to a placebo.

Forty-one Caucasian female subjects between the ages 45 and 66-years-old were included. Exclusion criteria were: subjects presenting serious illness or under medical treatment, subjects presenting skin diseases on the face and subjects having used an anti-aging cosmetic product up to four weeks prior to the start of the study. All subjects signed an informed and express consent form and accepted to not apply any other product to their face three days before starting until the end of study.

The active cream contained glycerin, THPE 2.5%, glycine soy, Mg aspartate, Zn gluconate and Cu gluconate. The placebo had the same color and texture as the product, but contained no active ingredients.

As noted, this was a double-blind, randomized, split-face, placebo-controlled study. The assignment of the active product or the placebo to left/right side of the face was determined by randomization.
At baseline (T0), a clinical assessment on each half-face was performed by a trained reliable investigator and standardized photographs of the face were performed to assess the signs of aging. For each side of the face, nine parameters linked to skin aging5 were scored on a 12 cm visual analogical scale (from 0 = not at all to 12 = very severe): lifted skin, wrinkles under the eye, jaw line definition, skin neck firmness, skin face elasticity, nasolabial fold, healthy glow, skin color, radiance. Then, a blinded controlled application of each product (placebo/active, according to the randomization) was applied to the respective half-face by the trained technician. Forty-five minutes after application, clinical evaluation was performed again, on each side of the face, by the blinded investigator.
After that, both products, labelled as “right” and “left” were applied by the subject on each side of the face once daily (in the morning) for eight consecutive weeks.
At week 4 (T4) and week 8 (T8), subjects were instructed to come to the study site without having applied any product since the morning of the previous day. Clinical assessment and photographs were performed on each side of the face.

The mean value and standard deviation of each clinical parameter were determined at each time point of the study and for each half-face. The variations of the parameter relative to control were expressed as a percentage.
The paired Student's “t” test (“two-tail”, P<0.05) was used to compare the values obtained 45 minutes after the first application, then T4 and T8 weeks of the product application to the initial values (T0 before the first application), for each half-face application. This test was also used to compare the active versus the placebo. 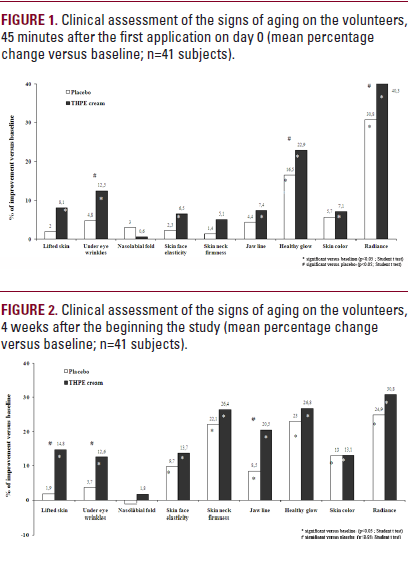