One hundred and ten patients were enrolled. The demographic data of these patients are shown in Table 1. Mean age of the patients was 44.8 years old with the range of 18 to 82 years old. Most patients had urticarial lesions without angioedema or systemic symptoms. Twenty-four patients (22%) had previous history of urticarial attacks.
One hundred and forty-seven suspected drugs were presumed as causing acute urticaria (according to WHO assessment classification), as shown in Table 2. It should be noted here that one patient might have taken more than one suspected drug. The causality assessments of ADRs were certain, 2.7 percent; probable, 41.5 percent; and possible, 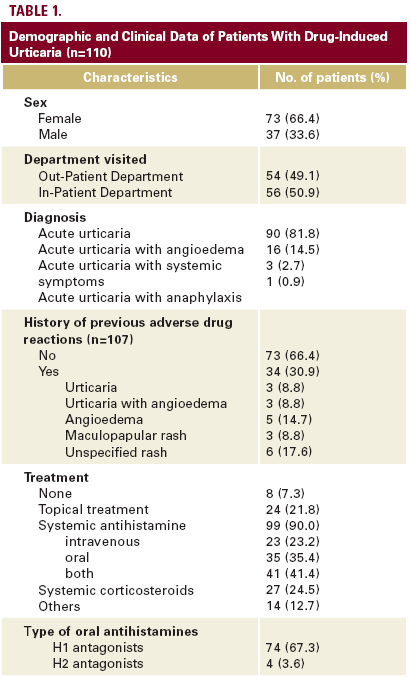 55.8 percent. The median duration from starting the suspected drug until developing urticaria was 18 hours (range: four minutes to 10 days). The median duration from cessation of using suspected drugs to clinical remission was 24 hours (range: 30 minutes to 22.5 days).
Antibiotics were the most frequent cause of drug-induced urticaria in this study. The first three most common suspected antibiotics were ceftriaxone, cephalexin and amoxicillin, respectively. Three common drug groups causing urticaria were antibiotics, non-steroidal anti-inflammatory drugs (NSAIDs) and opioids. The median onset and remission times of urticaria were compared as shown in Table 3. The different route of administration of antibiotics gave a different clinical course (Table 4). Both median onset and remission of urticaria due to intravenous antibiotics were statistically significantly shorter than those of the oral form. Similar results were detected in the opioids group (data not shown in table). The clinical courses of oral drug-induced urticaria were compared in Table 5. NSAIDs had the shortest median onset of urticaria and had statistically significant differences among three common drug groups.
In this study, sixteen patients had urticaria with angioedema. The most frequently suspected causative drug group was antibiotics (50%). Three patients had urticaria with systemic symptoms. The suspected drugs were intravenous ceftriaxone, intravenous cloxacillin and oral norfloxacin. The reactions developed within five to ninety minutes after receiving the suspected drugs.
Only one patient had anaphylaxis. She was 47 years old. Previously, she had taken carboplatin treatment for ovarian carcinoma several times without a problem. At the 9th cycle, after taking carboplatin for forty minutes, she developed urticaria with hypotension. She was treated with intravenous antihistamine and corticosteroids. The urticarial lesions were markedly improved within one day. Causality assessment was possible.
Among patients who had a personal history of atopy (mostly allergic rhinitis), three-fourths had NSAID-induced urticaria.