During focused, new-patient dermatology encounters, examination of the oral mucosa is often deferred, leading to missed diagnoses that patients may not be aware of. This is especially valid during an encounter with a non-English-speaking patient as they cannot effectively convey their concerns. This obstacle, in addition to major depression, which is frequently encountered in outpatient dermatology, together confer a challenging patient encounter that may render a poor quality of life for the afflicted patient. Vulnerable ethnic patient populations require special attention, provider cultural competency, and a thorough review of their history with the assistance of a certified foreign language interpreter. Herein, we present the case of a middle-aged Bengali female whose chief complaint of periorificial hypopigmentation led to an oral cavity examination, revealing unique findings.

A 43-year-old South Asian, Bengali-only-speaking female with a past medical history of major depressive disorder and schizophrenia, well-controlled with compliant use of risperidone for 20 years and amitriptyline for 12 years, presented to the dermatology clinic with a chief complaint of periorificial hypopigmentation of six monthsâ€™ duration. She reported using a peroxide-containing toothpaste twice daily and a moisturizing SPF 15 facial cream, and always dressing modestly with long-sleeved clothing and a religious veil. She denied use of tobacco, alcohol, illicit drugs, chewing betel quid, paan, or other exotic plants, or having amalgam dental fillings. On physical examination, a continuous, periorificial, mildly hypopigmented patch surrounding the vermilion border of the upper and lower cutaneous lips was noted in the patient with Fitzpatrick skin type (FST) IV. On examination of the oral cavity, slate-gray pigmented, ill-defined macules and patches were noted on the superior and inferior mucosal lips, buccal mucosae, hard palate, soft palate, and dorsal tongue without secondary changes, which were all unnoticed by the patient (Figures 1 and 2). The main differential diagnoses at this point included black hairy tongue, mucosal melanosis as an ethnic variant of normal physiologic pigmentation, drug-induced dyspigmentation, and, less likely, an underlying endocrinopathy. A biopsy was deemed the
best next step in management.
. 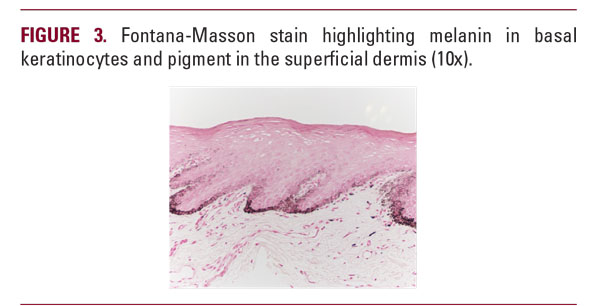 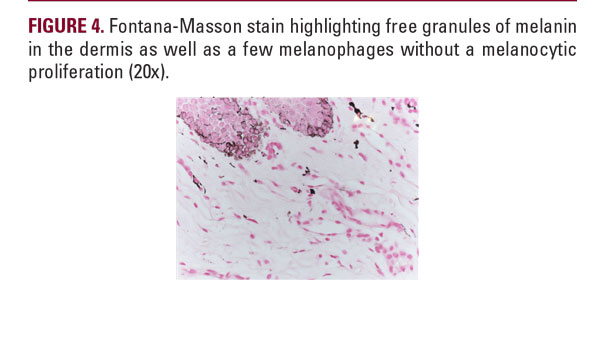