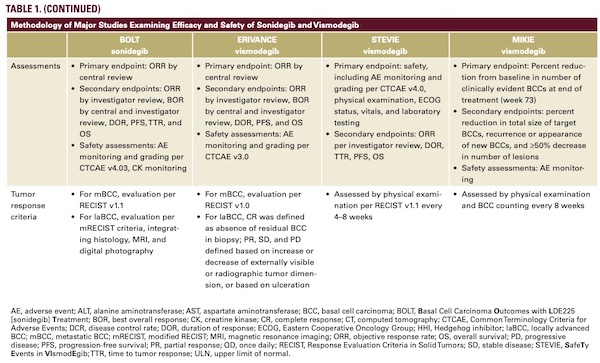 Patients had histologically confirmed mBCC for which all other treatment options had been exhausted, or laBCC that was not amenable to radiation therapy, curative surgery, or other local therapies.13 Adequate bone marrow, liver, and renal function as evidenced by standard laboratory assessments were also required for enrollment.13 Exclusion criteria included previous treatment with an HHI.13

ERIVANCE enrolled patients aged â‰¥18 years with an ECOG Performance Status â‰¤2 with measurable mBCC according to Response Evaluation Criteria in SolidTumors (RECIST), or laBCC with â‰¥1 tumor of â‰¥10 mm in the longest diameter.14 For patients with mBCC, confirmation of the diagnosis with computed tomography (CT) or magnetic resonance imaging (MRI) was required.14 For patients with laBCC, surgery was judged inappropriate if the tumor recurred after â‰¥2 curative surgeries or if curative resection was likely to result in substantial morbidity or deformity.14

Study Design
Study treatment included sonidegib 200 or 800 mg once daily (QD; 1:2 randomization, respectively) in BOLT, and vismodegib 150 mg QD in ERIVANCE.13,14 Randomization in BOLT was stratified by geographic region, disease type (laBCC vs mBCC), and tumor histology for patients with laBCC (aggressive vs nonaggressive).13 In both studies, treatment continued until disease progression, unacceptable toxicity, withdrawal of consent, study termination, or death.13,14 Dose interruptions of â‰¤3 weeks in BOLT and â‰¤4 weeks in ERIVANCE were permitted to manage toxic effects considered related to study treatment.13,14 The BOLT study design also allowed dose reductions, limited to a maximum of 1 dose reduction to placebo for patients in the 200 mg group, and 2 dose reductions to 400 and 200 mg for patients in the 800 mg group.13 The studies continued through 42 months for BOLT and 39 months for ERIVANCE.11,12

Evaluation of tumor response in mBCC used RECIST version 1.1 in BOLT and version 1.0 in ERIVANCE.11,12 To evaluate laBCC lesion response in BOLT, modified RECIST (mRECIST) composite multimodal criteria were developed for use in the complex