A Giant Cutaneous Horn: One of the Largest Recorded

We present a case of one of the largest cutaneous horns recorded in the known literature as an opportunity to explore diagnostic considerations and treatment options. Cutaneous horns are common exophytic neoplasms composed of dense keratin that are always secondary to primary lesions, which can be benign or malignant. Due to the variance of the primary lesion, diagnostic biopsies are necessary to rule out a malignant origin. Several case reports of giant cutaneous horns may suggest that a larger size indicates a verrucous origin, although a biopsy is necessary as this association has only been noted in very few cases. If the primary lesion is found to be malignant and extending to the biopsy margins, further treatment is required, whereas a benign origin usually requires no further treatment.

A65-year-old African American female presented to an outpatient dermatology clinic with an occasionally pruritic and painful “abnormal skin growth” on her back for 22 years. On the mid back was a 22-centimeter tan-brown, horn shaped growth, with a well vascularized base, attached to a pedunculated flesh colored plaque. A shave biopsy was performed below the base of the lesion. Pathology revealed an acanthotic endophytic cellular pattern with protruding columns of parakeratosis, consistent with a cutaneous horn arising from a verruca. Cutaneous horns are compact growths of keratin usually arising from either a verruca, an actinic keratosis, or more concerning, squamous or basal cell carcinoma. In fact, 23% of cutaneous horns develop from malignant cutaneous neoplasms underscoring the importance of histologic analysis and appropriate follow up. Fortunately, the margins on the biopsy specimen were negative/clear and the patient has yet to return with recurrence.

A literature search of various synonyms of the words “giant cutaneous horn” suggests that this reported case of a 22-centimeter horn is possibly the largest to ever be described. In looking at similar cases, it appears that cutaneous horns of such a considerable size tend to be secondary to verruca rather than the more dangerous malignant neoplasms.1,2 Although no genetic analysis was performed on this biopsy, one previous case was found to have extensive horn like growths induced by human papillomavirus type two.3 It can be hypothesized that such large horns, and such extensive growth are result of verrucae that may have a genetic predilection in their viral DNA to tremendous angiogenic and proliferative abilities. Cutaneous horns secondary to malignant neoplasms tend to grow in

a much more disordered pattern, as would be expected with malignant cells, compared to horns secondary to verrucae 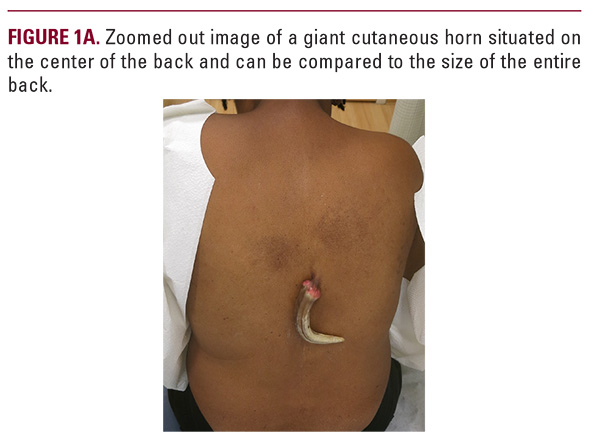 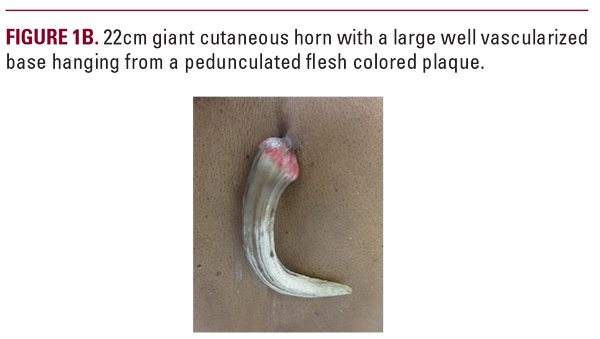