Searching for the Best Drug Combination to Treat Melanoma Patients: From Lab to Bedside 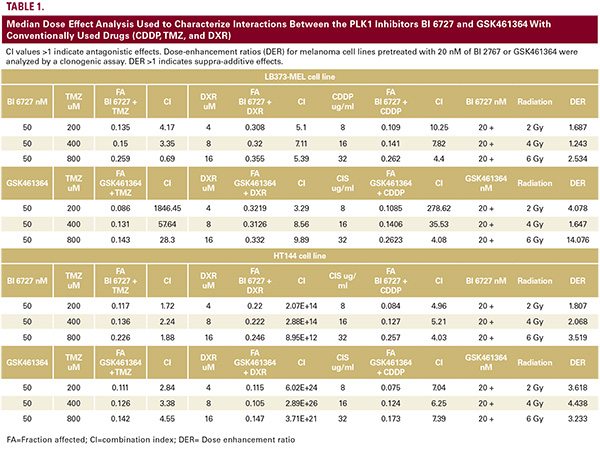 effect represented by a viability decrease of only ~30% after 72 hours of treatment with the highest concentration tested (Figure 1A and 1B). Moreover, the lack of response was more evident when treating primary cultures, where even after 72 hours, GSK461364 was able to reduce viability in merely ~10%. Of note, BI 6727 was highly inefficient, increasing viability in 5% (Figure 1C). In addition, combinations with CDDP, TMZ, or DXR were highly antagonistic (Table 1). Conversely, PLK1 inhibition by low concentration (20nM) of either PLK1 inhibitor led to radiosensitization for both HT144 and LB373- MEL, showing supra-additive effects at all doses tested (Table 1). It should be considered, however, that melanoma cells are highly resistant to standard anticancer drugs and in our model, drugs were administered simultaneously. Perchance, other alternative combination schemes at varying sequences and different time intervals might lead to dissimilar results. Only recently, the radiosentizing effect of PLK1 inhibitors has gained attention. A growing number of evidences place PLK1 inhibitors as a radiosensitizing agent for squamous cell carcino- mas,11-12 medulloblastomas,13 glioblastomas,14 nosopharyngeal carcinoma xenografts,15 and osteosarcoma.10 Moreover, PLK1 seemed to be a predictive marker for radiation response when assessed in pretreatment biopsies of patients with advanced rectal cancer.16 Although the radiosensitizing effect of PLK1 inhibition seem well documented, Lund-Andersen et al.,17 evaluating osteosarcoma and colorectal cancer cells, demonstrated that either radiosensitization or radioresistance may be achieved, dependending on the delivered treatment schedule. This observation turns clinical treatment with PLK1 inhibitors far more complex. Of note, no previous studies to date have focused on the radiosensitization effect of PLK1 inhibition for human melanoma. As recently stated by Ascierto et al.,18 combination seems to represent the most up-to-date treatment approach for treating melanoma. Besides new compounds, our results point to the potential radiosentizing effects of these drugs for melanoma cells in vitro. This property, if correctly explored, may be an important strategy to be studied among