The University of Iowa Hospitals and Clinics (UIHC)

A Caucasian female, aged 3 years, presented to our clinic for evaluation of asymptomatic, slowly enlarging pink and brown scaly plaques on her trunk and extremities, which had been present since birth. Past medical history was significant for environmental allergies and recurrent otitis media necessitating myringotomy tubes. Active medication list included loratadine and montelukast sodium. There was no family history of similar skin lesions.
Upon initial evaluation, the patient was found to have several irregular, 5 mm to 4 cm, atrophic, hyperpigmented thin plaques with well-defined borders on the right and left upper arms, lower legs, left chest, and vulva following a blashkoid distribution (Figures 1 and 2). There was sparing of the palms and soles. Pathology showed mild papillomatosis and hyperkeratosis associated with tiers of parakeratosis extending above foci of a thinned granular layer and epidermal dysmaturation (Figure 3). Based on the clinical and pathologic findings, a diagnosis of generalized linear porokeratosis was rendered. 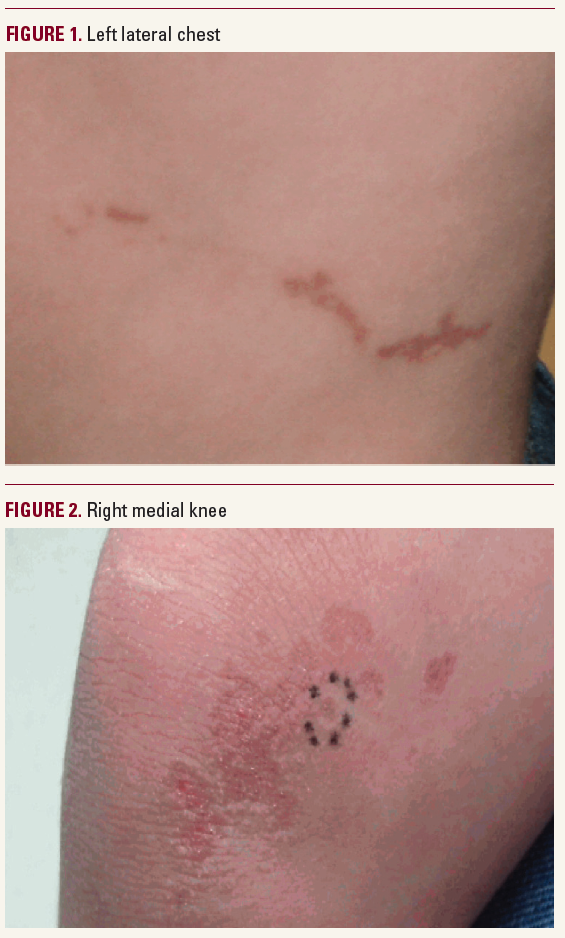 therapy, surgical excision and destruction, and carbon dioxide laser therapy. For our patient, treatment with tretinoin 0.025% cream was initiated to one area of involvement. She has yet to follow up in our clinic.