Abstract
.
The University of Florida Dermatology Residency Program was founded in 1992 by Franklin Flowers MD, as a division of the Department of Internal Medicine. Dr. Flowers, a board certified dermatopathologist and Mohs surgeon, served as the Division Chief of Dermatology upon joining the University of Florida in 1982. After founding the residency program, he continued to hold this position until 2000 also concomitantly served as the rst Program Director until 1997. Stanton K. Wesson MD began his tenure as Program Director in 1997 and continues to serve in the same position today. From 2000 to 2003 Robert Skidmore MD took over as Division Chief of Dermatology, from 2003 to 2004 Dr. Wesson served as Interim Chief, and from then until the present-day Dr. Flowers returned to serve as Division Chief. The residency program began with 2 positions in 1992 and this inaugural class completed their training in 1995. The program has excelled at training and fostering strong medical dermatologists, which has been demonstrated by the majority of early graduates pursuing careers in private practice, veteran affairs, and academic dermatology. In the late 90s, with the help of Ashraf Hassanein MD, the University of Florida was fortunate to offer a dermatopathology fellowship program under the Department of Pathology. Dr. Hassanein served as the Fellowship Director, with Dr. Flowers as the Associate Director. The fellowship has since thrived and accepts one fellow a year. The department currently has 3 faculty members in dermatopathology, as well as several visiting faculty. The current Fellowship Director is Kimberly L. Merkel MD, who recently took over the position, which had been previously held by Ann A. Church MD. Both Drs. Church and Merkel completed their residency training and dermatopathology fellowships at the University of Florida, in 2010 and 2013, respectively. In 2012, the Division of Dermatology founded its own department, leaving the Department of Medicine. With this new expansion came a new Chair for the department, Dr. Vladimir Vincek MD Ph.D, who is certified in anatomic and clinical pathology by the American Board of Pathology and in dermato- pathology by the American Board of Dermatology. At this time, there were only 5 faculty members in the department; however, this number quickly grew to 11 over the ensuing years. With this growth, the department left the small quarters in which it was founded at the Malcolm Randall VA Medical Center in Gainesville. A brand new multispecialty medical facility called the University of Florida Health Springhill was built, and the department now encompasses the 4th oor and is able to serve patients in general dermatology, pediatric dermatology, surgical dermatology, and cosmetic dermatology. This growth also allowed for the addition of 2 residency positions in 2013, which increased the total number of residents from 6 to 12. Department Highlights With these additional resources, the department started focus- ing on building new strengths. In the 2012 to 2013 academic year, the program began a research division.The purpose of this division is to foster career paths in dermatology that include basic science and clinical research. All residents are required 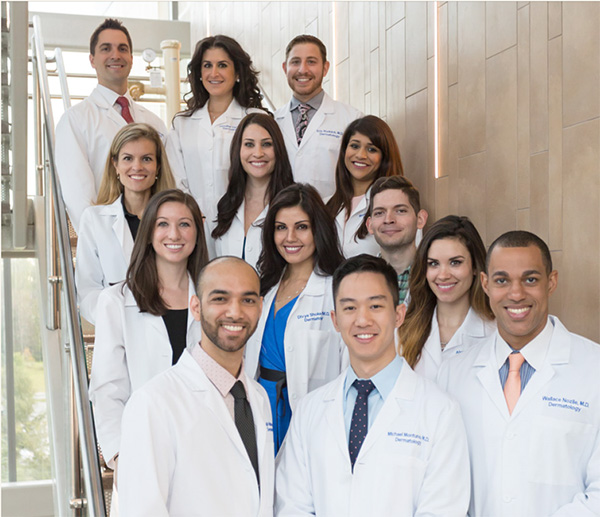