J Drugs Dermatol. 2020;19(5): doi:10.36849/JDD.2020.2191
Pityriasis lichenoides is an uncommon skin disorder with unknown etiology. It contains a range of clinical manifestations including acute papular lesions that quickly grow into pseudo vesicles and central necrosis to small, scaling, benign-appearing papules.1,2 The tumor necrosis factor (TNF) superfamily of cytokines contain a group of pro-inflammatory cytokines that activate signaling pathways for cellular differentiation.3,4 Etanercept, aTNF-α inhibitor is used as monotherapy or in combination with other immunosuppressants (such as methotrexate) to treat specific inflammatory diseases. This study presents a 38-yearold man with ankylosing spondylitis (AS) who developed pityriasis lichenoides chronica (PLC) during etanercept therapy.

Case Presentation
A 38-year-old male with back pain was referred to our outpatient clinic. He was started on NSAIDs on demand. Three years afterwards, he developed polyarthritis and tenosynovitis in the knees, hands, and feet. He was referred to a rheumatologist and he was found to be HLA-B27 positive, and pelvic radiographs showed bilateral grade 2 sacroiliitis. The Schober's test was positive and magnetic resonance imaging (MRI) showed inflammation of the sacroiliac joint. He was diagnosed with AS. Complete blood count, blood sugar, renal function tests, liver function tests, and urine routine were all within normal limits. Thyroid function was also normal. Psychiatric examination of the patient was unremarkable. There was no personal or familial history of arthritis. The patient did not present any comorbidity. Due to inefficacy of NSAIDs, etanercept 50 mg per week subcutaneously was prescribed. After eight weeks, he was evaluated by a dermatologist for the appearance of scaly erythematous papules, on the back and arms. A diagnosis of PLC was made (Figures 1 and 2). Treatment with daily topical corticosteroids was initiated. After one month of treatment, the rash decreased and treatment with etanercept was continued. 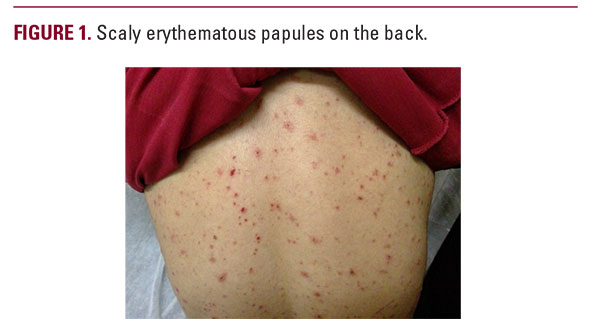