Rosacea is among the most common facial skin conditions diagnosed by dermatologists. Typical clinical features include erythema, flushing, telangiectasia, papules, and pustules distributed on the central face. While the prevalence of rosacea is highest among white populations of Northern European descent, recent reports have found that rosacea frequently occurs in people from a broad range of racial/ethnic backgrounds and skin types. When rosacea presents in darker skin types, the diagnosis is often more challenging due to masking of features by increased epidermal melanin. As such, under-diagnosis and underreporting may contribute to misconceptions about the prevalence of rosacea in populations with skin of color. Recognizing the unique presentations and complications associated with darker skin types is necessary to reduce the disparities in rosacea treatment, especially as the American population continues to become increasingly heterogeneous. Although rosacea is most common in middle-aged females, patients of other demographics may have more negative impacts on quality of life due to their disease. In this article, we review rosacea management with a focus on special patient groups: people with skin of color, and less common forms of rosacea, in order to diminish the physical and psychosocial burden of rosacea in all patient groups. Due to the variability inherent to rosacea, we advocate for an individualized, patient-centered approach to disease management.

Rosacea is a common, chronic facial condition presenting with various combinations of erythema, flushing, telangiectasia, edema, papules, and pustules most often affecting fair-skinned individuals.1,2 Although most prevalent in light-skinned populations with Fitzpatrick skin types I-II, rosacea affects a broad spectrum of populations, including those with skin of color. The prevalence of rosacea in nonwhite racial/ethnic populations is less studied, but recent data suggest that it is more prevalent than previously reported.3 In order to effectively diminish the physical and psychosocial burden of rosacea, considering the diverse populations groups affected by this condition is paramount.

The prevalence of rosacea is estimated at about 10 percent of predominantly fair-skinned populations and affects approximately 16 million American adults.4,5 The onset of rosacea is often after 30 years of age and displays a female predominance with the exception of phymatous rosacea (Figure 1), which is more common in older males.4 In younger populations with rosacea, this female predilection is amplified.1 Prevalence of rosacea in Germany and Russia based on general population screening found 18% of subjects with rosacea were aged 18-30 years.6 Though more common in adult females, studies evaluating disease severity support the prevalence of more severe disease in subjects of male gender and less than 60 years of age.7 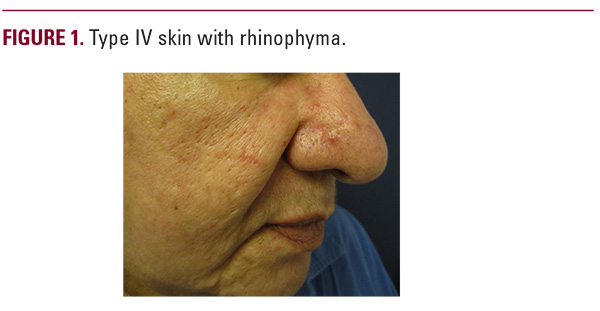 Until recently, rosacea was widely considered to be a disease almost exclusively affecting light-skinned individuals. However, the prevalence of rosacea in skin of color populations is increasingly being recognized. A study analyzing data from the National Ambulatory Medical Care Survey from 1993-2010 to determine racial and ethnic makeup of patients with rosacea found that of all patients diagnosed with rosacea, 2% were black, 2.3% were Asian or Pacific Islander, and 3.9% were Hispanic or Latino.8 These findings challenge the long held belief that rosacea is a disease largely limited to white individuals of Northern European heritage with Fitzpatrick skin types I-III.

The lower prevalence rates of rosacea in non-white populations is likely due to a combination of factors including under-reporting, under-recognition (due to a low index of suspicion and