Abstract
Psoriasis is a common dermatologic condition with a variety of morphologic presentations. These variations include the less common hyperkeratotic form, psoriasis ostracea, defined as having pronounced adherent scales resembling an oyster shell. Of the ostraceous cases that have been reported in the literature, many occur as generalized outbreaks in patients with long-standing history of psoriasis. Rarely does this remarkable variant occur as a direct flare from a cutaneous insult. In these situations, when a pre-existing dermatosis appears in response to a traumatic insult to skin, the process is referred to as the Koebner phenomenon. In addition to lichen planus and vitiligo, psoriasis is a commonly known condition that can present as a Koebner reaction. In this atypical case, the authors present a 21-year-old male with remarkable ostraceous psoriatic lesions precipitated by an upper arm tattoo, demonstrating the Koebner phenomenon.

A 21-year-old Naval active duty male presented for his first dermatologic evaluation with the chief complaint of a six-week history of mildly pruritic cutaneous lesions involving his face and recently tattooed right upper arm. His initial skin manifestation was a new-onset greasy, scaling rash over his forehead, eyebrows, and bilateral cheeks. Two weeks subsequent to developing his facial lesions, after acquiring a large upper arm tattoo, he observed a reaction of similarly appearing red, scaling plaques throughout the recently tattooed region.

The condition continued to increase in severity in both his tattooed arm, as well as face, over the next six weeks. The patient was initially treated by his primary care provider with oral antibiotics for a presumed bacterial infection, but was subsequently referred to Naval Medical Center San Diego Dermatology for failure to improve. 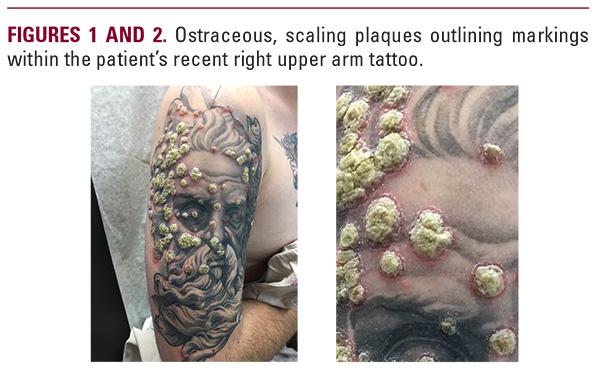 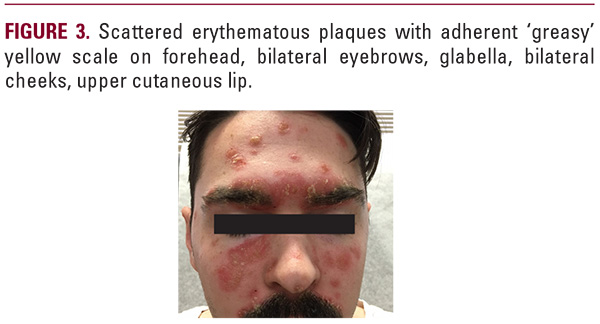