Leukemia cutis (LC) is defined as disseminated or localized skin lesions that result from neoplastic leukocytes infiltrating into the dermis, epidermis, or subcutaneous tissues.1 Leukemia Cutis can present in many ways, including single or multiple violaceous, reddish, brownish, or hemorrhagic ulcers, nodules, papules, or plaques of varying sizes.1
Leukemia cutis can arise in various leukemic or dysplastic conditions, most commonly in AML with 3% to 15% of patients having cutaneous lesions.1,2 Generally, development of LC in AML portends a poor prognosis.1
Histopathology shows infiltration of the neoplastic cells into the dermis and occasionally into the epidermis, with extension into the subcutaneous tissues. Periadnexal or perivascular involvement may be prominent.2,3 The pattern of infiltration can vary as well with the most frequently observed pattern being diffuse and nodular.2 Less common patterns include single-filing of cells through collagen bundles and a granuloma annulare- like pattern.2 The World Health Organization (WHO) recognizes four main categories of AML: AML with recurrent genetic abnormalities; AML with multilineage dysplasia; therapy-related AML; and AML not otherwise specified.4 Classification by WHO includes genetic, immunophenotypic, biologic, and clinical features to define specific disease entities and their associated prognosis and potential treatments.
Though WHO classification is the standard for today, the French- American-British classification (FAB) is still commonly used. The FAB divides AML into subtypes from M0-M7 based on cellular morphology and histochemical activity.5 In some instances, those morphologic characteristics attributed to each subtype can actually predict the genetic abnormalities. M4 subtype of AML occasionally exhibits increased numbers of abnormal marrow eosinophils making it M4Eo variant. Chromosome 16 inversion is associated with this particular morphologic variant.6 Our patient was diagnosed with AML M4Eo based on the bone marrow biopsy with karyotyping significant for inv(16). Chromosome 16 aberrations account for approximately 6% of all AML diagnoses and 20% of AML M4.7 An inversion of this chromosome can establish AML diagnosis without any other cell counts and predicts a favorable prognosis.7 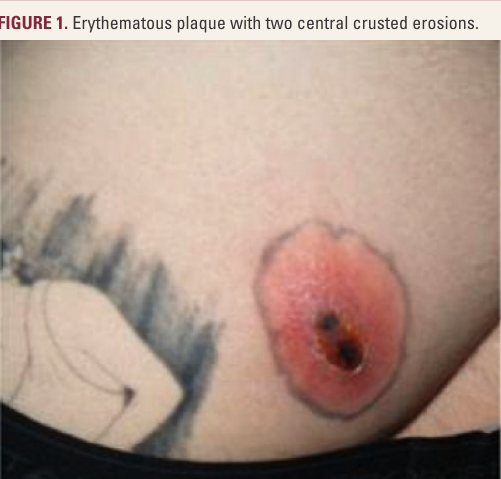