Disparities in the Utilization of Dermatologists for Primary Cicatricial Alopecias

Early intervention in cicatricial alopecias is critical to prevent permanent damage to the hair follicles. Previous literature, however, has suggested that individuals who are black are less likely to visit dermatologists than individuals who are white.1

In order to assess if there are disparities in the utilization of dermatologists for scarring alopecias, we performed a retrospective chart review of treatment naive individuals seeking care for the first time from a dermatologist, for the most common forms of primary cicatricial alopecias. We then quantified the degree of hair loss at presentation from clinical photographs using the Severity of Alopecia Tool (SALT) II score.1 Statistical analyses were performed using the chi-squared and t-tests (Stata, version 14.2, StataCorp, College Station, TX). The George Washington University institutional review board approved this study.

In total, we identified 86 treatment naive individuals (98% women) with clinically diagnosed primary cicatricial alopecias. In this cohort, subjects who were identified as black by the investigators presented to dermatology on average 45.6 months after the self-reported onset of hair loss compared to 16.8 months after the self-reported onset of hair loss in subjects were identified as white (P=0.002). Additionally, black subjects presented to dermatology with more severe alopeciaâ€”having lost an average of 37.7% of their scalp hair compared to 20.3% lost at presentation in white patients (P<.001). In regard to retention in care, black subjects also followed up for shorter periods of time (mean, 8.2 months) compared to white subjects (mean, 15.7 months; P=0.016). These results are depicted in Table 1.

In our cohort, subjects who were black were more likely to have Medicaid insurance than subjects who were white. However, when Medicaid enrollees of all races were compared to individuals with private insurance of all races, no significant differences in the duration (P=0.24) or severity (P=0.17) of hair loss at presentation were observed, suggesting that the disparities observed here are not related insurance status.

In this cohort, black subjects with primary scarring alopecias presented to dermatologists later after the self-reported onset of hair loss, with more severe hair loss, and followed up for shorter periods of time, compared to white subjects. We could not, however, assess the impact of race-discordance on these results given the previous lack of diversity within our department, and dermatology in general—the second least diverse specialty 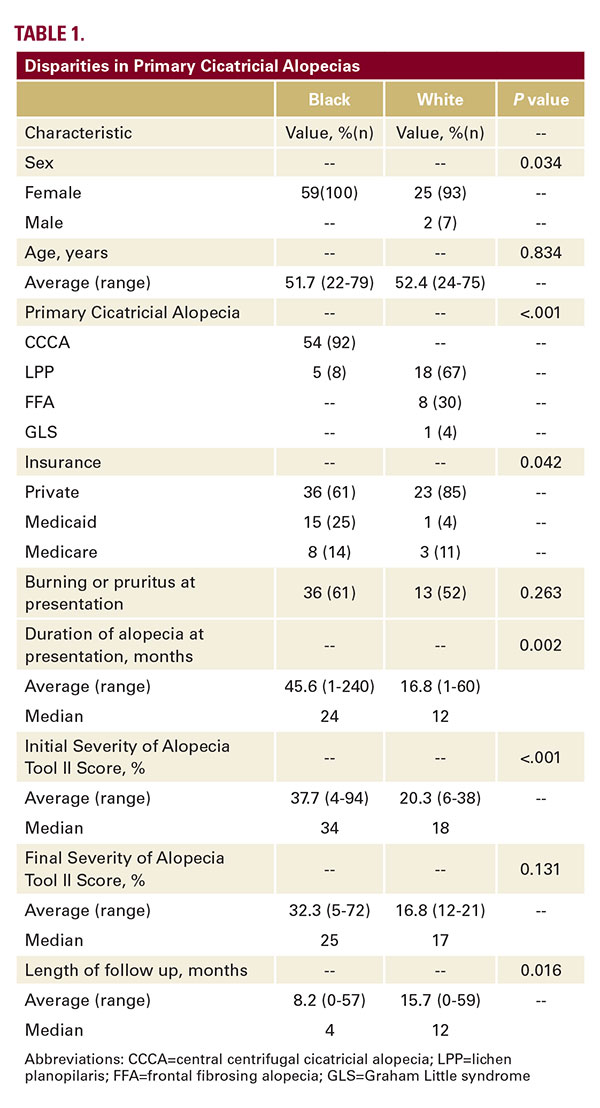