As laser specialists in dermatology, we have been at the forefront of device development for cutaneous applications. Recently, our progress and discoveries have been applied to the development of technologies in women’s health. This crossover of advancements has generated a great deal of interest in a new domain of genitourinary device development.Fractional laser resurfacing, including fractional carbon dioxide (CO2), erbium:YAG, 2940 nm and 1470 nm, and monopolar radiofrequency are being applied to genitourinary disorders. In September 2014, a fractional CO2 laser from (DEKA) along with a CO2 laser (Cynosure), were cleared by the US Food and Drug Administration (FDA) in a 510K for “incision, excision, vaporization, and coagulation of body soft tissues in medical specialties including aesthetic (dermatology and plastic surgery), podiatry, otolaryngology (ENT), gynecology, neurosurgery, orthopedics, general and thoracic surgery (including open and endoscopic), dental and oral surgery, and genitourinary surgery. The use with the scanning unit is indicated for ablative skin resurfacing (Table).”1 Subsequently, the fractional CO2 device (MonaLisa Touch, Cynosure) began to be implemented in the treatment of vulvovaginal atrophy and other symptoms of the genitourinary syndrome of menopause. Additional fractional CO2 devices followed, with 510K clearances for “surgical applications requiring the ablation, vaporization, excision, incision, and coagulation of soft tissue in medical specialties including: aesthetic surgery (dermatology and plastic surgery), podiatry, gynecology, neurosurgery, orthopedics (soft tissue), and arthroscopy.” These include the IntimaLase/IncontiLase (Fotona), CO2RE Intima (Syneron), and Femilift (Alma). The Joule (Sciton) at 2940 nm is FDA cleared for “ablation, vaporization, and coagulation of soft tissue, and for skin resurfacing,” and at 1470 nm for “ablation, vaporization, hemostasis, or coagulation of soft tissue," and is also being used to treat genitourinary conditions (diVa). Monopolar radiofrequency was FDA cleared for “electrocoagulation and hemostasis and to create lesions in nervous tissue in dermatological and general surgical procedures" and has been developed for the treatment of the vulvovaginal tract (Thermi VA, Thermi) (Table). The genitourinary conditions to which these devices have been applied include atrophic vaginitis, urinary incontinence, and pelvic prolapse, though FDA clearance for these indications has not yet been attained.Until recently, women’s genitourinary health has relied on surgical interventions or hormonal treatments to address 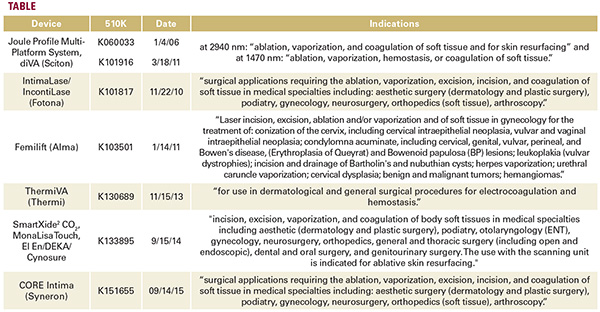