ARTICLE: Colloidal Oatmeal Part I: History, Basic Science, Mechanism of Action, and Clinical Efficacy in the Treatment of Atopic Dermatitis 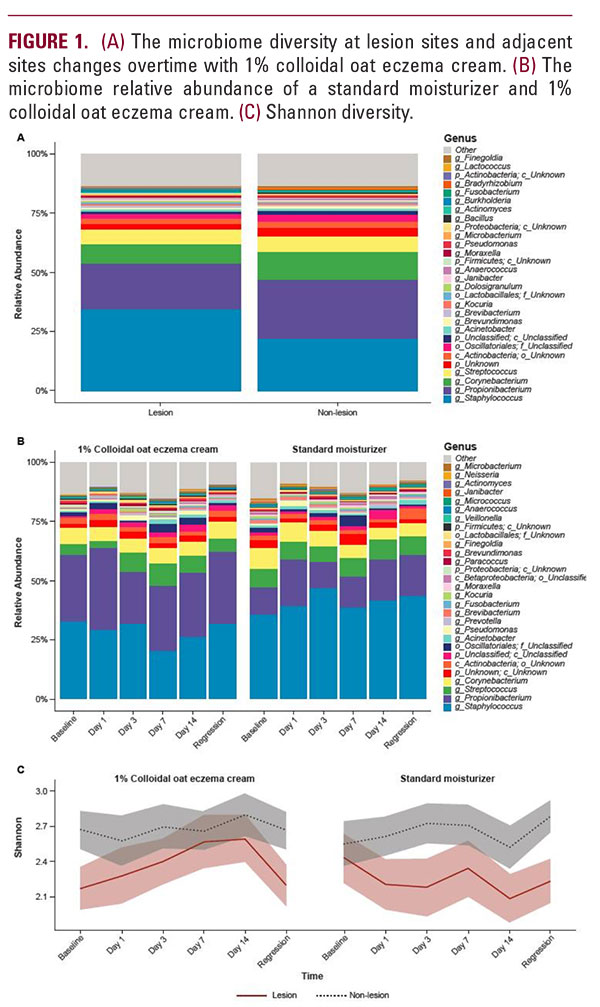 (based on level I evidence) and there is strong evidence that their use can reduce disease severity and the need for phar-macologic intervention.24

The use of colloidal oatmeal in the treatment of AD is ideal for several reasons. Both lesional and non-lesional skin in AD is characterized by xerosis, barrier abnormalities, and de-creased content of ceramides. The disrupted skin barrier, as evidenced by increased transepidermal water loss, allows for penetration of irritants and allergens from the environment, subsequently leading to itch via cytokine release and inflammation.25,26 Avenanthramides present in colloidal oatmeal can decrease inflammation and thereby have an anti-itch effect, as was previously discussed, via reducing the release of pro-inflammatory cytokines, and have been shown to significantly reduce scratching response by up to 40% compared with ve-hicle in murine models.27 The lipids and fatty acids in colloidal oatmeal also offer barrier protection and help to replenish and supplement the stratum corneum in atopic dermatitis, which is known to be characterized by decreased ceramides (a vital stratum corneum lipid).

Several studies have examined the potential benefit of colloidal oatmeal as an adjunctive treatment in AD. In a study by Nebus et al, 25 patients aged 12–60 years with mild to moderate AD (by Hanifin and Rajka criteria) and at least 5% body surface area were enrolled in an 8-week study consisting of a topical regimen of twice daily application of an oat-based occlusive cream and once daily oat-based body wash. Patients taking systemic medications for eczema were excluded, but those using prescribed topical treatments were allowed to continue their medications. Investigator Global Assessment (IGA) scores, Eczema Area and Severity Index (EASI) scores, and itch severity were all significantly improved at weeks 2, 4, and 8.28 An additional study with a younger cohort of 23 patients aged 3–5 months to 5 years-old examined the role of an adjunctive regimen of colloidal oatmeal cream twice daily with a colloidal oatmeal-based glycerin cleanser in conjunction with topical steroids. IGA and EASI scores were significantly improved from baseline at both week 2 and week 4, and Baby/ Child Quality of Life Index was significantly improved at week 4.29 In an international multicenter study conducted in Greece, Italy, and Portugal, 71 patients aged 6 months to >20 years with mild-to-moderate AD currently treated with or without topical steroids and/or immune modulators applied colloidal oatmeal twice daily. At 12 weeks, patients reported significant improvement in itch, erythema, and quality of life.30

Additional studies have compared the safety and efficacy of 1% colloidal oatmeal cream to prescription creams and emulsions in the management of mild to moderate atopic dermatitis. In a randomized, double-blind, two-arm trial by Lisante et al, 90 patients aged 6 months–18 years with mild to moderate AD were randomized to either use colloidal oatmeal cream or a standard, steroid-free prescription barrier cream twice daily. Patients using class IV–VII topical steroids were allowed in the study, those requiring systemic or class I–III steroids were excluded. At week 3, EASI scores showed that the colloidal oatmeal cream was non-inferior to the prescription cream.31 Atopic dermatitis is also characterized by a decreased microbial diversity with a disproportionate colonization and susceptibility towards Staphylococcus aureus pre- and during flares.32 A controlled, multicenter, clinical usage study of patients aged 16–50 years with mild to moderate eczema examined the effect of twice daily use of 1% colloidal oatmeal cream on the skin microbiome. Compared to treatment with a standard moisturizer, treatment with 1% colloidal oat eczema cream was associated with trends toward lower prevalence of Staphylococcus species by day 7 and higher microbial diversity of lesional skin, approaching the level of diversity on