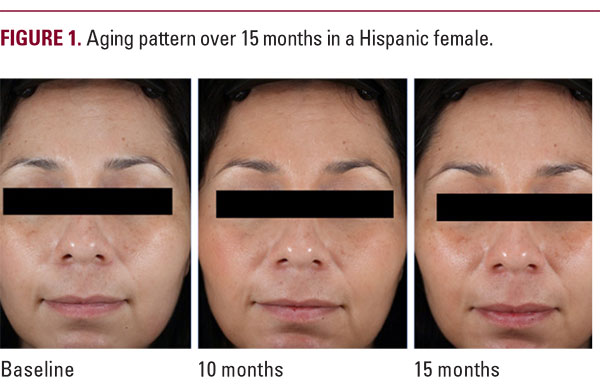 ment. De Rigal et al assessed the skin color of females globally, with an instrumental approach using the "chromosphere®" spectroscopy imaging system to capture skin color variation in details. This together with interviews led to the establishment of a color assessment chart of 66 shades that enabled clinicians and consumers to match skin tone and color variation precisely. In this manner, they were able to establish a veritable geography of consumer skin tone analysis in multiple ethnicities. Based on objective elements, this mapping makes it possible to adapt cosmeceutical products to the expectations of different consumers, and evaluate the effectiveness of skin care products that target radiance or uneven skin tone in different ethnic groups.Due to the heterogeneity of Hispanic American population and the wide range of skin tones,5,6 a combination strategy is required to define and evaluate color and pigmentation related concerns in this population. It is recommended that clinical researchers adopt a combination strategy using Fitzpatrick phototype, ITA values, and skin color charts,5 to accurately represent the clinical manifestation of facial pigmentation and skin tone variation. By using such analysis in combination with self-assessment questionnaires, diversity of skin tone and color shift with photoaging in Hispanic group can be quantitated effectively.5,6

During the photoaging process, it was reported that major concerns of Hispanic females were “yellow tone” and “dullness” of their skin. Other concerns include acne/breakouts, uneven skin tone, pigmentation spots and marks, undereye dark circles, and scarring. As with all other skin types, the ideal skin for Hispanic females is one that looks uniform in color, consistent and clear, without any blotchiness, marks, patches, dark circles, or age spots. Despite the concerns on the quality of their skin, the data from measurement of skin tone of Hispanic women showed a fairly good evenness among younger population.4 A significant darkening of skin with age as well as skin heterogeneity was also observed for all 4 different skin types (Caucasian, Chinese, Hispanic, and Black), suggesting the damaging effects of photoaging.6 Figure 1 illustrates the aging progression of a 40-year-old Hispanic female subject of skin type IV over a period of 15 months in Los Angeles area. The baseline picture taken during the winter month demonstrates fairer complexion with more uniform skin texture. The figure at 10 months and 15 months demonstrates increasing pigmentation, redness, unevenness of skin color, and beginning of the appearance of dark shades and patches.

The majority of the U.S. Hispanic population resides in areas with high UV index, and sun seeking behaviour is very common. However, the vast majority of Hispanics do not meet sun protection recommendations.7 Regardless of national origin, being born in the U.S. or based on the amount of time spent living in the U.S., Hispanics do not uniformly engaged in sun protection behaviors on a regular basis, and thus there is a need to raise awareness of skin cancer risks, preventive measures, and benefits of sunscreen and sun protection among Hispanics in general.8 The sun protection behaviors recommended to reduce skin cancer risk and premature aging are sunscreen use, shade seeking, and use of sun protective clothing that minimizes skin exposure to the sun. Many Hispanics do not engage in these behaviors on a routine basis.8,9 Data from several studies indicate that a number of sociodemographic factors are associated with Hispanic individuals’ engagement in sun protection behaviors.8,9 For example, Hispanic adults report that they engage in sun protection more by staying in the shade (53.7%) than use of sunscreen (32.3%) or wearing sun protective clothes (18.1%). Not surprisingly, 36.7% of the subjects indicated that they never use sunscreen. With age, those aged 65 and over appear to have stronger preference for staying in the shade and use of protective clothing than younger Hispanics. However, those aged 65 and over tend to use sunscreen less than younger Hispanics. Education and language also plays a role in the preferred sun protection measures with college educated Hispanics and those that speak mostly or only English having a higher usage rate of sunscreen than those with some high school education and mostly or only Spanish speakers; inversely, those with some high school education or those who mostly or only speak Spanish report using shade more frequently than those with college education or those who mostly or only speak English.10 In a separate study, facial use of sunscreen was higher in Hispanic women (36.3%) than Hispanic men (16.0%) and while the women’s use of sunscreen in other photo-exposed areas is lower than on the face (25.7%), it is still higher than in males (11.9%).11 Other life style factors such as pollution, dietary influences, stress, and lack of sleep can also influence the skin quality of Hispanic subjects. All these factors point to a need for better