Abstract
We report a rare case of leiomyoma of the fingernail in a 59-year-old woman. She presented with red discoloration, lifting, and distal splitting of her left 2nd fingernail for several months. She reported sensitivity at baseline which became more painful in the cold. Histopathology sections from the nail matrix biopsy specimen showed a dermal proliferation of bland appearing spindle shaped cells with elongated, blunt ended nuclei (SMA and caldesmon positive), arranged in fascicles, which is typical of leiomyomas. Interestingly, our patient had a history of uterine leiomyoma, requiring hysterectomy. To our knowledge, this case is the first report in which a subungual leiomyoma is associated with another leiomyoma in the same patient.

Leiomyomas are benign neoplasms derived from smooth muscle and are primarily found in the gastrointestinal and female genital tract. In the skin, leiomyomas present as dermal-based nodules or papules with smooth borders and firm consistency. There are three main subtypes, which include: piloleiomyoma, arising from arrector pili muscles, genital leiomyoma, derived from smooth muscle of the scrotum, vulva, or nipple, and angioleiomyoma, arising from the vein smooth muscle.1 Angioleiomyomas most commonly occur within the 30-50 year age range and are twice as prevalent in women than in men. They most frequently involve the lower extremities, with the upper extremities affected in <10% of cases. Malignant transformation is rare, and tenderness is a common symptom, although most are asymptomatic.2

A 59-year-old woman presented with red discoloration of her left 2nd fingernail for several months. She also noticed lifting of the nail and distal splitting that then progressed proximally. She reported that she had some sensitivity of the affected nail at baseline and it became somewhat painful in the cold. She denied prior trauma to the nail, bleeding, or purulent discharge. Her medical history was significant for Grave’s disease, hyperlipidemia, and uterine fibroids requiring hysterectomy. Her only medication was methimazole. On physical examination, the left 2nd fingernail demonstrated longitudinal red discoloration near the lunula that blanched with pressure, as well as, severe onycholysis and longitudinal splitting (Figure 1). All other fingernails and toenails were unremarkable. The Love test and cold sensitivity test were negative. An x-ray of the affected nail unit was negative for bone erosions or tumors. An MRI with and without contrast revealed a 1 x 1 x 3 mm enhancing lesion with bony erosion, which was suspicious for a glomus tumor. A nodule underlying the area of erythronychia was exposed and biopsied following partial nail avulsion. The specimen was analyzed by histopathology (Figures 2-4).Histologic sections of the biopsy specimen showed a dermal proliferation of bland appearing spindle shaped cells with elongated nuclei, arranged in small fascicles (Figures 2, 3). The spindle shaped cells were marked strongly and diffusely with caldesmon (Figure 4) and with smooth muscle actin (SMA) immunostains. S100 and CD31 immunostains were negative. Eight weeks following surgery, the nail sensitivity had resolved and the erythronychia was no longer present. 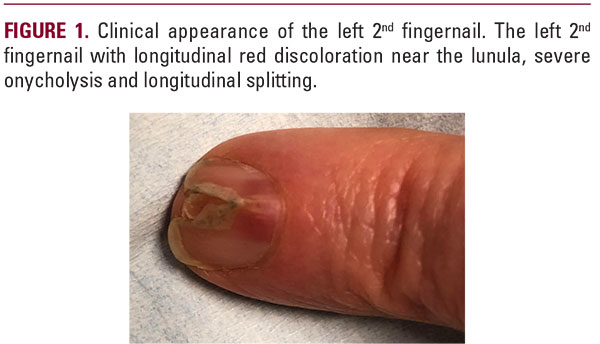