of naltrexone.3,14 This concept has served as the basis of various trials of LDN therapy in cancer and autoimmune disease.In 2007, a prospective open-label trial of LDN in pediatric Crohn’s disease was published showing good efficacy and safety.1 The study showed that of patients treated with LDN, 25% went into remission and 67% had improved to mild disease activity at 16 weeks. Systemic and social quality of life improved with LDN treatment (p equals 0.035). Importantly, all children tolerated LDN without any severe adverse side effects at 8, 16 and 20 weeks of the study. The most common side effect was sleep disturbance, occurring in 7 of the 17 subjects. Five subjects changed the timing of LDN from the evening to morning due to insomnia. In no instance was a dose reduction necessary for sleep disturbances. A follow-up randomized-controlled study of LDN in 14 pediatric Crohn’s patients yielded similar results.15 Since the first successful application of LDN in Crohn’s disease, its use has been studied in other chronic inflammatory conditions with promising results. These include fibromyalgia, major depressive disorder, cancer, chronic pain, Charcot-Marie-Tooth and multiple sclerosis.1-5 It has recently been suggested that LDN’s efficacy in these conditions may be due to the blockade of the OFGR axis leading to downstream regulation of T-lymphocyte proliferation and a decrease in proinflammatory cytokines IL-6, IL-12, tumor necrosis factor-α, and nuclear factor NF-?B ultimately leading to clinical improvement.16 Activation of pro-apoptotic mechanisms may also play a role in halting pathogenesis.3 This overall immunomodulatory function of LDN is thought to contribute to resolution of pain, pruritus, and inflammation in the aforementioned conditions.The Evidence in Skin In light of several studies showing the immunoregulatory functions of LDN, it is possible to imagine its application within dermatology. To date, only several case reports and case series have been published suggesting the efficacy of LDN in skin conditions. One of the first articles demonstrating the potential of LDN in systemic sclerosis was published in 2011.7 In a 3-patient case series, treatment with LDN was shown to significantly improve pruritus. At 2 month follow-up, the mean improvement in pruritus symptoms was a decrease of 6.7 points on a 10-point scale. Two of the three patients reported a score of 0 for pruritus, and no adverse side effects were reported. These findings suggest that LDN may be an effective, well-tolerated treatment for the pruritic component of systemic sclerosis. Interestingly, LDN did not improve the physical lesions of systemic sclerosis.7 However, there are articles that support LDN’s potential for clearing certain types of skin lesions. In 2017, two case studies simultaneously reported that patients with Hailey-Hailey disease (HHD), a genetic blistering condition, achieved improvement of lesions with LDN therapy.8,17 In one of the reports, patients noted improvement of their lesions at 1-2 weeks and clinical resolution at 2 months.8 Lesions flared when stopping LDN and cleared within a few days on re-challenge. A 2018 case report of a patient with HHD started on LDN reports similar findings.13 It has been suggested that (in addition to influencing opioid receptors and the TLR signaling pathway) the possible mechanism for this successful treatment may involve improved keratinocyte differentiation and wound healing.3 LDN has also been trialed in cases of lichen planopilaris (LPP).6 A case of series of 4 patients with LLP, including one with the frontal fibrosing variant, showed that adding LDN to the treatment regimen led to improvements in subjective pruritus, inflammation, and alopecia at one month follow-up. A limitation of this case series is that all patients were on concomitant therapy with topical, intralesional, and/or systemic therapies at the start of therapy. However, the fact that addition of LDN to these regimens led to notable improvements in both pruritus and physical findings such as extent of alopecia and scalp inflammation is encouraging.Most recently, a case report showing improvement of guttate psoriasis with compounded LDN has been published.9 The patient had previously been on apremilast and topicals with 50-60% improvement of psoriatic lesions, but had discontinued all therapies due to high cost. After starting on compounded LDN (4.5 mg), the patient experienced an 80% improvement at 2 months and 80-90% improvement at 12 months. The authors reported that several lesions recurred briefly; however, their appearance and symptoms were mild. Thus, the patient has elected to continue LDN therapy. The only reported side effect was xerosis at the site of the lesions. The above reports are summarized in Table 1. 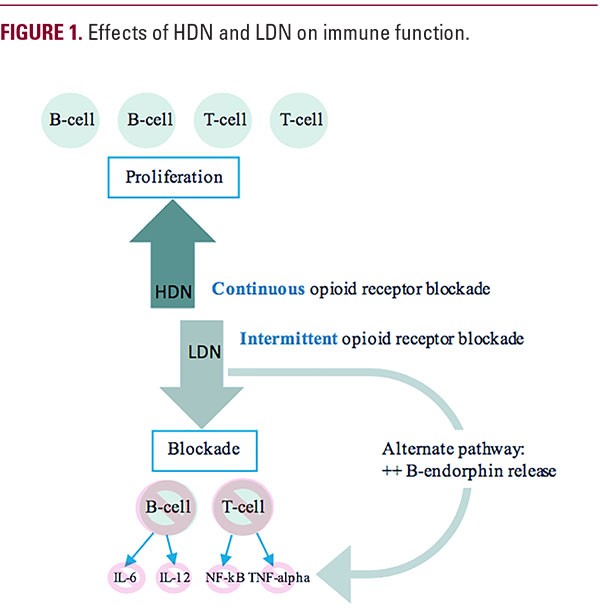