Board Review: In partnership with Derm In-Review

Abstract
The content of these questions and answer s are taken from Derm In-Review. For more practice Q&A and Board prep study tools, visit DermInReview.com/Merz. 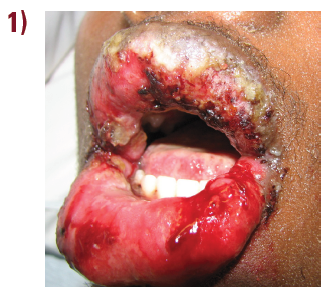 A 16-year-old previously healthy male presents with severe mucositis as shown in the photograph, which developed over 1 week. He reported mild malaise and cough previous to this. He has no other cutaneous involvement (including vesicles, bullae, erosions, or targetoid lesions), but has conjunctival injection and crusting and sloughing in the nares. He denies recent unintentional weight loss, chills, or night sweats. His vital signs are unremarkable. There are no new medications and he has several negative HSV swabs and negative HSV antibody serologies. His CBC is unremarkable. Which of the following is the most appropriate next step in management, given the most likely diagnosis?
A. Start intravenous valacyclovir.
B. Order chest X-ray and mycoplasma serologies or PCR.
C. Transfer to burn unit.
D. Perform CT of head, chest, abdomen, and pelvis.
E. Start IVIG and aspirin. 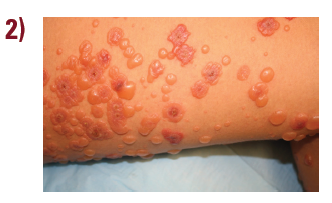 A 17-year-old previously healthy female presents with blisters all over her body, including her oral mucosa, as depicted. She denies any new medications or recent infections. Which of the following is FALSE?
A. The most common antibody responsible for this binds to the NC16 domain of collagen XVII.
B. In drug-induced forms, vancomycin is more commonly a cause than penicillin.
C. Neutrophils are the predominant inflammatory component histologically.
D. The majority of these patients can obtain a clinical response to dapsone within 48-72 hours.
E. Eventual spontaneous resolution occurs in many patients. 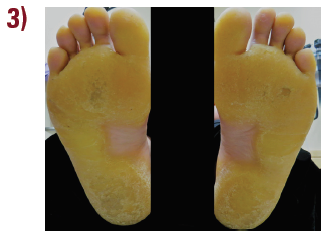 A 23-year-old female presents with asymptomatic thickened skin on her soles. She has mild thickening on her palms but denies any other skin findings. Upon further questioning, her mother, several maternal uncles, and maternal grandfather have had similar findings and some of them have also had esophageal cancer. Which of the following is FALSE?
A. The patient is also at risk for esophageal cancer, which typically occurs in the 5th decade.
B. This is inherited as an autosomal dominant disorder.
C. This patient likely has abnormalities in her hair as well.
D. This patient may also have oral leukokeratosis.
E. The cause of TOC is a mutation in the RHBDF2 gene.