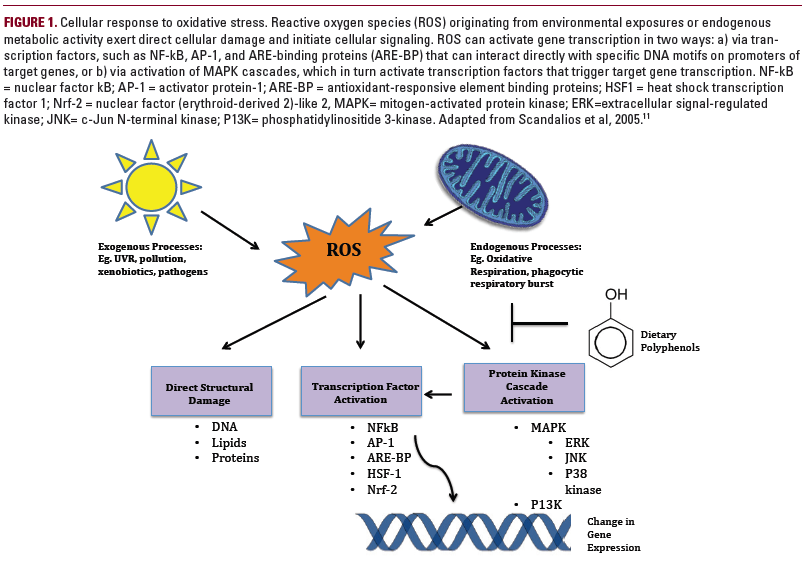 The type of pathway activated depends on the source and duration of the stress, as well as on the specific cell type and stage.11

Many disease states, such as cancer, diabetes, aging and cardiovascular disease have been linked to sustained oxidative stress.12,13 To combat these damaging effects, the body has an elaborate system of defense consisting of enzymatic (Figure 2) and non-enzymatic antioxidants. The naturally occurring enzymes include glutathione peroxidase, catalase, and superoxide dismutase (SOD), all of which neutralize ROS. SOD catalyzes the conversion of superoxide anion into hydrogen peroxide, which can then be neutralized into water and molecular oxygen by catalase and glutathione peroxidase (Figure 2). The skin has non-enzymatic antioxidant reserves, including L-ascorbic acid, glutathione, vitamin E, and ubiquinol.14 To combat depletion, these physiologic antioxidants work in an integrated network to regenerate each other in the process. Inherent antioxidant mechanisms can be overloaded by excessive exposure to stressors and age-related decreases in enzyme production and function. Unfortunately, topical application of antioxidant enzymes has failed due to compound instability, poor cutaneous absorption and short-lived catalytic activity on the skin.15 Looking for an alternate route, companies, and investigators have turned to nature to identify supplemental antioxidants.

Plants are an intuitive source of antioxidants as they are constantly forced to protect themselves from sun-induced oxidative damage.14 Plants synthesize vitamin C, vitamin E, and polyphenols, naturally occurring compounds with anti-inflammatory, immunomodulatory, and anti-oxidant properties.16 Currently 8000 polyphenols have been identified, with the most common sources being fruits, vegetables, whole grains, tea, chocolate, and wine. Polyphenols are classified chemically according to their phenolic structure, as well as the source of origin and biologic function.17,18 Phenols exert antioxidant activity by a few mechanisms. They neutralize free radicals by donating an electron or hydrogen atom and act as direct radical scavengers of lipid peroxidation chain reactions.19 In addition, polyphenols act as metal chelators, particularly of Fe2+, reducing the rate of the Fenton reaction and subsequent oxidation by reactive hydroxyl radicals.20 They have been shown to induce endogenous antioxidant enzymes and inhibit xanthine oxidase.21 Polyphenols also