A 27-year-old Caucasian woman with a history of cryptogenic renal failure presented with a 1.5-year history of asymptomatic papules on her central face, which developed six months after a kidney transplant. The papules progressed to involve the forehead, ears, and forearms. Her posttransplant immunosuppressant regimen included tacrolimus and mycophenolate mofetil.
On physical examination, the patient had flesh- to pinkcolored folliculocentric papules, some with spinous protuberances (Figure 1a). Histopathologic examination revealed massively dilated follicles with keratotic plugging of the infundibula. An abrupt change to inner root sheathtype cornification and the absence of hair shafts were noted (Figure 2). Also present in the perifollicular epithelium were vacuolated keratinocytes with numerous coarse trichohyaline granules. The constellation of clinical and his- 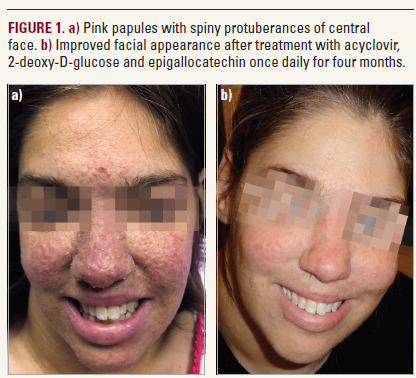 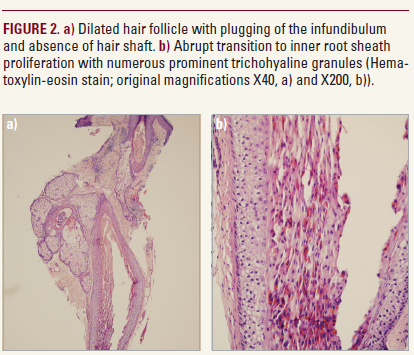 Viral-associated trichodysplasia of immunosuppression, previously termed trichodysplasia spinulosa, is a relatively newly-described entity.1 This condition has been reported in immunosuppressed transplant patients and in patients receiving chemotherapy for hematolymphoid malignancies.2,3,4 The classic clinical features include asymptomatic or mildly pruritic folliculocentric flesh- to pink-colored papules that exhibit a predilection for the central face.1 There may be infiltration and distortion of facial features, particularly of the nose.1 Alopecia with spine-like projections replacing hairs may be seen, affecting the eyebrows and eyelashes.5 Without treatment, the lesions may progress to involve the trunk and extremities.6 Electron microscopy studies have revealed intranuclear icosahedral viral particles that are morphologically suggestive of a polyomavirus.1, 2,4,7, 8 Re-